Collingwood has hired a psychologist to help end Travis Cloke’s woes in front of goal.

Cloke kicked 5.4 during the Magpies’ big win over St Kilda last Friday, however the major talking point of the game came after the big forward kicked two behinds from directly in front of goal.

“The best goalkickers are very consistent, regardless of the circumstances,” Buckley is quoted as saying on the Magpies’ website.

“Trav’s improved markedly in that. So we’ll back the work that he’s doing and that he’ll continue with.”

Marchant previously worked closely with former Essendon star Matthew Lloyd and played a major role in transforming the Bombers forward into one of the greatest goalkickers in AFL history.

Cloke has kicked 398 goals and 327 behinds in his 11-year AFL career, and it is hoped Marchant can help the 28-year-old improve his kicking in the back-end of his career.

“The ability to be able to stick to routine regardless of circumstances that you’re in (is crucial), whether it’s 10 metres out straight in front or 50 metres out on an angle,” Buckley said.

“No two shots are the same, but you’re wanting to have the same routine.

“So it’s the composure and practice of routine to be able to go and execute.”

Marchant has been working with Magpies players once a week for the past fortnight.

Cloke faces a major mental battle this Saturday when his side face Essendon at the MCG in front of an expected crowd of 98,000 in the traditional ANZAC Day clash. 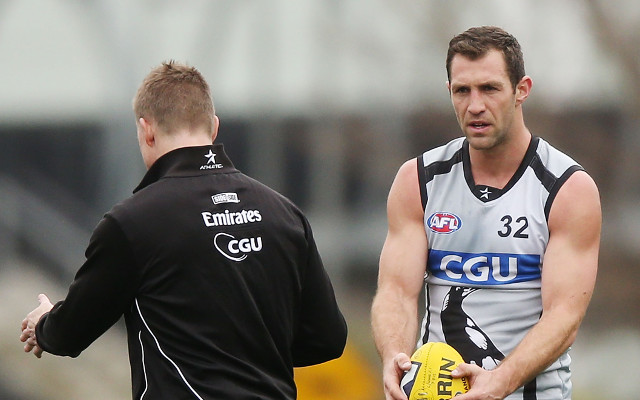