Tottenham Hotspur goalkeeper Hugo Lloris is reportedly being lined up by Manchester United, as the Red Devils plan for life without David de Gea, who could be on his way to Real Madrid this summer.

But is Lloris good enough to be the number one at Old Trafford?

Well, he’s inferior to De Gea, accord to stats recently published by OPTA.

Lloris has had more shots to deal with that his Premier League rivals and, although he has made more saves as a result, he has a lower save percentage rate than De Gea, Courtois and Hart.

So, although he may be among the best possible replacement options for United, Lloris would be a step down in class. 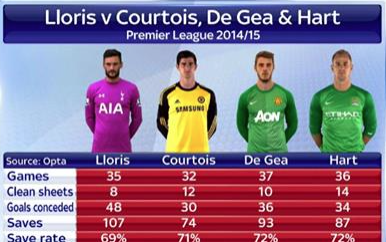