The Gunners have chased Benzema for what seems like an eternity, but Giulianelli, who writes for FourFourTwo and La Gazzetta dello Sport, says the wait will soon be over.

Giulianelli understands that Benzema, 27, will fly to London on Sunday, before completing a medical on Monday afternoon.

Benzema could then be officially introduced to the Arsenal fans before kick-off in Monday’s night’s big Premier League game against Liverpool at the Emirates Stadium.

Liverpool fans will be pleased to hear that there is no chance Benzema will play against them on Monday evening. 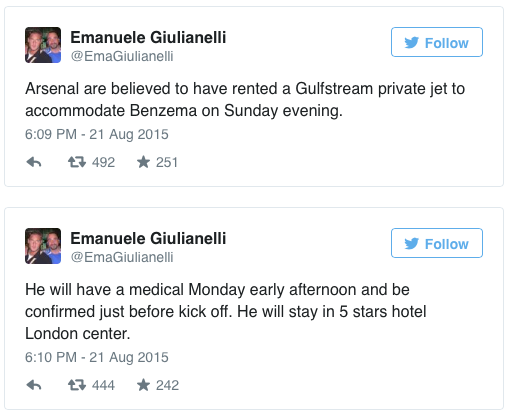 Despite Giulianelli’s confident claims, some bookmakers remain unconvinced that Benzema is destined for Arsenal.

skyBET are still offering 13/8 on Benzema signing for Arsenal before September 3, although BetVictor and 10Bet make it odds-on that he will be a Gunner by then.