Luke Brooks stars in his first game at the top as he side topples the Dragons.

His potential has been talked about for months and those in the know believe he has the potential to be one of the next big names in the NRL.

True to form, Luke Brooks stepped up to the mark required he starred in his first grade debut for the Wests Tigers as he side ran out convincing winners 34-18 at the SCG.

The 18-year-old put in a performance that will give Tigers’ fans something to be hopeful about in 2014 after their current season has been one of their worst ever.

Despite still being a teenager, Brooks showed the maturity in his game to know what type of attacking play was needed at the right time to get the result his team was after. 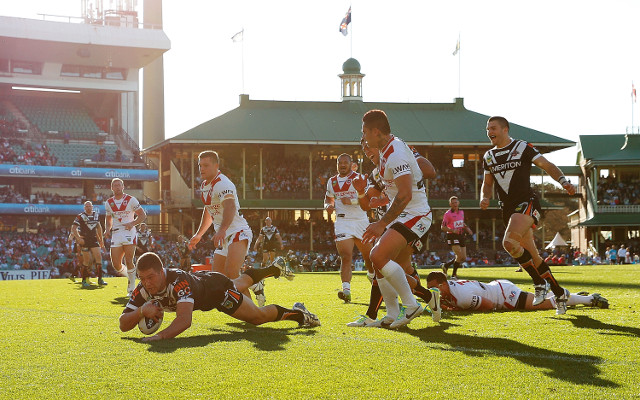 He threw the final pass to see Curtis Sironen in the first half and a deft grubber kick allowed another try to be scored, this time by Tim Samona, his second for the game.

But impressively still was his grubber kick to force a repeat set, as Brooks took it upon himself to follow the play and wrap up St George’s Jason Nightingale to ensure his side got the ball back, rather than attempting a high-risk attempt to get across the line.

Trailing 6-0 after Dragons forward Leeson Ah Mau powered over inside the opening eight minutes, there were fears the Tigers might fold like a house of cards.

Instead, the club’s growing list of emerging superstars stepped up and delivered, with the likes of Curtis Sironen, James Tedesco, Tim Simona and Joel Luani all submitting career-best opening halves.

The Tigers scored opening half tries through hooker Luani, Braith Anasta, Sironen and Simona on the stroke of halftime, who scorched 90m against the run of play after a brilliant Sironen ball.

Even club outcast Benji Marshall, whose fans have turned the blow torch on the one-time favourite son over the last week, had a solid game. 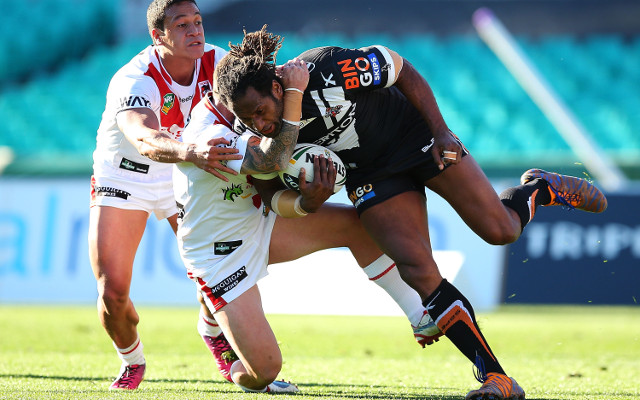 The only problem was, the Tigers clocked off at halftime. When the second half resumed, the Dragons went bang, bang with tries to five-eighth Adam Quinlan and captain Ben Creagh, reducing a 22-6 halftime lead to 22-18 with half an hour to play.

With the game on the line, the debutant laid on Simona’s second try and then scored one himself to end any hope of a Dragons fight back.

Wests Tigers will look to continue to fire under generation next when they tackle South Sydney next week while the Dragons will be out to salvage some pride when they take on the last-placed Parrammatta Eels.