Newcastle Knights left to wonder what might have been.

Star Melbourne fullback Billy Slater steered the Storm to a 16-14 come-from-behind win over Newcastle on Sunday in their NRL clash at AAMI Park.

The victory was Melbourne’s third straight and the Knights’ fourth successive loss, leaving them outside the top eight.

Newcastle were well positioned for an upset – their first since 2004 on Melbourne’s home turf – with a 14-10 lead at halftime thanks to a brace of tries by winger Joey Leilua.

But Ryan Hoffman and Slater combined with 11 minutes left on the clock to tie up the match before Storm skipper Cameron Smith converted to give his team the lead for the first time in the match. 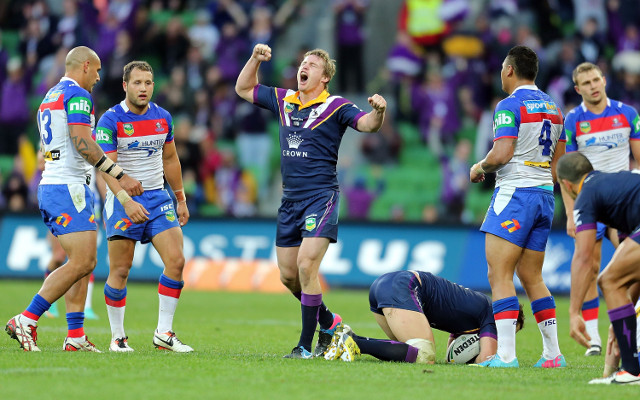 NSW State of Origin star Hoffman was able to get a ball out the back of a tackle and fullback Slater stepped around his Queensland teammate Darius Boyd to score between the posts.

The Knights, in contrast, started strongly with Leilua spinning out of a Slater tackle to cross in the fifth minute.

Slater was hampered by a knee to his thigh two minutes earlier, although he was able to run out the injury and return to his devastating best.

Newcastle halfback Tyrone Roberts converted and then added a penalty for an 8-0 lead.

The home side were able to get on the scoreboard after repeat sets took their toll on the Knights.

Smith found five-eighth Gareth Widdop, who sent the ball on to centre Maurice Blair to touch down. 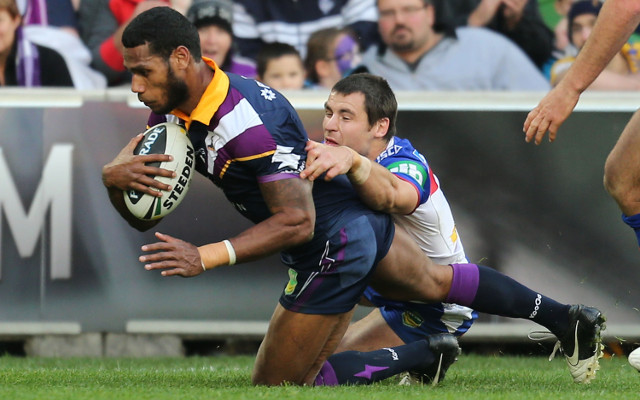 But the lead was out to 10 points when Knights five-eighth Jarrod Mullen put a banana kick through which bounced straight into Leilua’s arms for him to stroll across the line.

Sisa Waqa made amends late in the half when he scored at the end of a well-worked set move, with the Knights’ defence caught short.

The second 40 minutes was an arm-wrestle with Slater’s try the only points of the half, the Knights leaving Melbourne empty-handed again.

Craig Gower, who hadn’t played in the NRL since 2007, made a successful return after cutting short his Super League contract to join the Knights this week.