The Brisbane Broncos have earned an important 32-12 victory over an average Wests Tigers side to stop their NRL title hopes from going into free-fall.

After losing their last three games the Broncos had slipped well outside of the top eight and could have fallen as low as 13th if they had dropped four in a row.

But thanks to two tries to Josh Hoffman and generally a slick effort from the home side at Suncorp Stadium, they were able to avoid placing more pressure on coach Anthony Griffin.

The Wests Tigers scored first when Liam Fulton took the ball to the line down the short-side, before grubbering back infield where James Tedesco won the race for the  ball.

Wests lost Braith Anasta early in the game after he left the field clutching his arm with what was an AC joint injury. 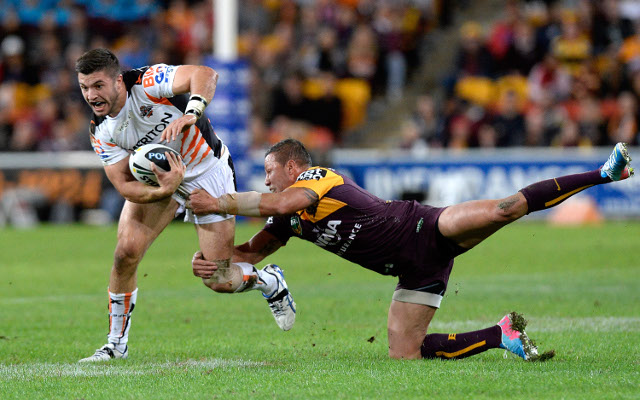 Matt Gillett scored a very soft try for the Broncos after he fended off  Benji Marshall and Eddy Pettybourne with relative ease to cruise across the line and Scott Prince slotted the conversion and the home side drew level 6-6.

Tigers hooker Masada Iosefa could have a case to answer after he was put on report in the 26th minute for an apparent trip on Sam Thaiday.

Brisbane’s high kicking options were ordinary through the first 25 minutes, but a short grubber by Jack Reed before another by Josh Hoffman saw Reed touch down for the try.

The try was created out of nothing and from broken play, but it allowed the Broncos sneak ahead 10-6. 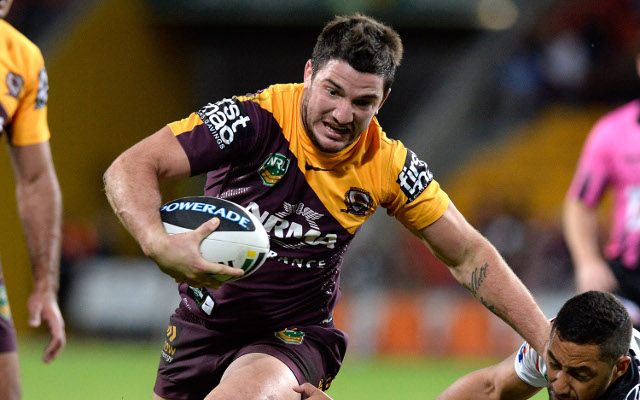 Both sides struggled to apply pressure to their opponents in their danger zone, with much of the first half played in the middle third of the field.

Iosefa went close to scoring after burrowing over from dummy-half but the Tigers were denied by the video referee.

Liam Fulton was active in defence for the Tigers, as he made it his mission to pressure the Brisbane halves.

A late tackle by Sauaso Sue on Brisbane prop Ben Hannant gave the home side a penalty from rugby in front of the posts, and Prince made no mistake to give Broncos a converted try lead.

Anasta came back on the field for the Tigers just before half-time, in what was a surprise given the severity of the hit that led to him being taken to the changerooms for treatment.

Hoffman scored an amazing try after diving into the corner in a forward roll in mid-air to give his side
a vital lead of 10 at half-time. 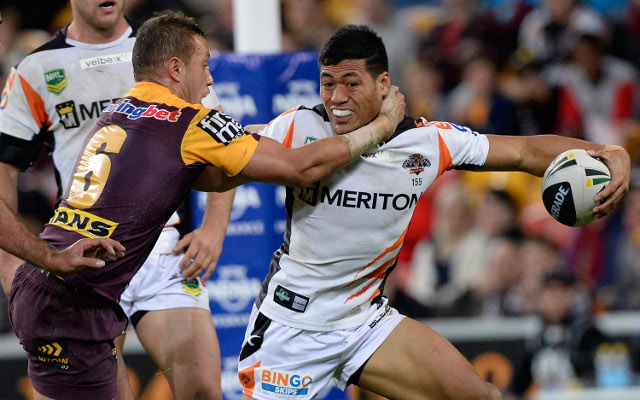 Both sides played expansively to start the second half as they looked to spread the ball in
the hope of opening up holes in the defensive line.

Justin Hodges scored an easy try to make the score 22-6 as Brisbane began to bust the Tigers up the middle of the field with one more try all-but sealing the important win for the home side.

And that try came through Prince as he sliced through more soft defence by the Tigers as the weight of possession eventually crushed the visitors, with the four-pointer to the Brisbane halfback giving him 1000 points for his NRL career.

Despite him missing the conversion the score had blown out to 26-6 with 13 minutes left.

Sauaso Sue scored a consolation try  for the Wests Tigers but Hoffman’s second saw him power his way in the corner.

Prince rubbed more salt into the wounds of his former side as he nailed the conversion from the sideline as the Broncos broke their three-game losing streak to win by 20.