While not a guarantee that Marcus Mariota will be the No. 2 overall selection in the draft, the Titans have made their intentions clear.

Tennessee Titans head coach Ken Whisenhunt said that the team would make Marcus Mariota the starting QB if they took him No. 2 overall in the 2015 NFL draft.

At the NFL Head Coaches Meeting on Tuesday, Whisenhunt addressed the issue of the possibility of the Titans using their No. 2 overall pick to take the former Oregon QB who won the 2015 Heisman Trophy and brought the Ducks to the College Football Championship game.

Whisenhunt stated that he was very impressed by Mariota’s workouts and said that if the team took him with that No. 2 overall pick he would become the starting QB.

Ken Whisenhunt on Marcus Mariota: “If he comes to us at No. 2, he’s definitely going to be the day 1 starter..I’m very impressed by Marcus.”

The Titans are coming off a season where they had terrible QB troubles – no fewer than three different QBs starting multiple games for the team and none of them winning more than one game. The Titans would go on to finish 2-14 and received the No. 2 overall pick in the 2015 NFL draft.

Former starting QB Jake Locker retired due to injury concerns despite being just 26, and backup QB Zach Mettenberger declared he could beat Mariota or former FSU QB Jameis Winston in a QB battle – despite losing all of his starts in 2014. 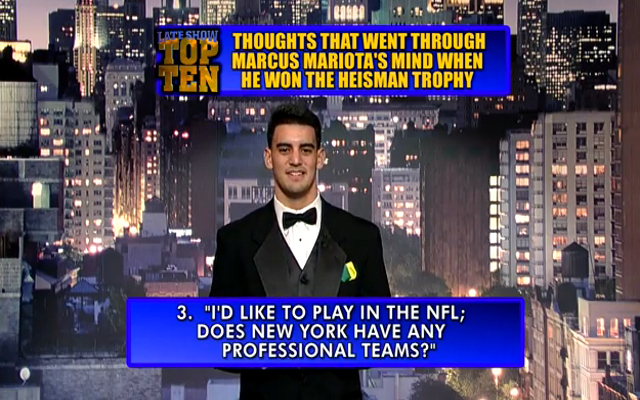