New Dragons’ signing makes a big impact in first game of the season.

Big money buy Gareth Widdop has shown he could be worth every cent for St George Illawarra in spearheading the Dragons to a 44-24 NRL opening round win over the Wests Tigers.

Widdop had a direct involvement in four of the Dragons’ seven tries and kicked eight goals from eight attempts to give the joint venture hope their days of a spluttering attack are over.

The England international joined the Dragons on a four-year $2.2 million dollar deal this season and was earmarked as the key to inspiring a side that has struggled to score points the last two seasons.

The former Melbourne pivot combined well with his outside men and halves partner Michael Witt before Witt went off midway through the second half with a shoulder injury.

Defence was a concern for both sides, but the win will take some pressure of Dragons coach Steve Price, especially following their pre-season thumping at the hands of South Sydney.

The Tigers started well but faded badly in a worrying sign for coach Mick Potter.

Things were looking up for the new season when prodigal son Pat Richards crossed in his first game for the joint venture since 2005, scoring in the fifth minute.

The Tigers added to that five minutes later when fullback James Tedesco scooped up a Josh Morris dropped ball and split the Dragons defence to race 60m to score under the posts.

With Richards kicking both conversions the Tigers led 12-0.

Tyson Frizell then opened the Dragons account for 2014 when he charged over from close range from a Mitch Rein pass in the 15th minute.

But the Tigers struck back when Robbie Farah darted over from dummy half and Richards again landed the conversion for the visitors to lead 18-6 after 20 minutes.

The Dragons then took control of the contest to score three unanswered tries either side of half time to race ahead to a 26-18 lead after 45.

Ben Creagh scored on a short-side play from Widdop in the 24th minute before Gerard Beale crossed in the 32nd minute.

With a Widdop penalty goal after the bell, the Dragons led 20-18 at halftime.

Michael Witt scored his first try for St George Illawarra after Widdop stepped his way through the line.

Martin Taupau then barged over in the 48th minute and with another Richards conversion they had cut the Dragons lead to 26-24 with 32 minutes to play.

After Witt exited, Frizell scored from an inside pass from Widdop in the 61st minute, before Rein scored in the 65th to put the result beyond doubt.

Widdop kicked his seventh goal of the game and the home side led 36-24.

Adam Quinlan then raced away for the final try, for Widdop to convert from in front. 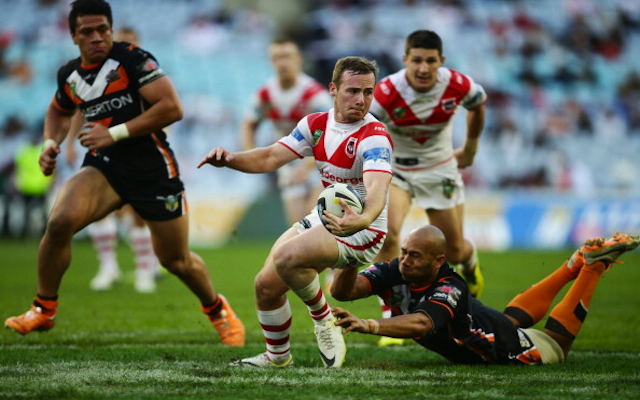