Star winger could make shock turnaround after finishing last round on the bench.

St George Illawarra officials say they will give Brett Morris “every chance” of proving his fitness ahead of the Dragons clash with the Gold Coast Titans at Skilled Park this weekend.

Morris was reduced to a spectator in round eight when he inured his knee after being tackled in the process of attempting to score a try.

The injury scare sent a shock-wave through the NSW Origin camp, however, with the Dragons’ approach to the injury, the flying winger still could take his place.

Matt Cooper (toe) returns at centre in the only change, with Nathan Green dropping out in a blow for the young player who looked impressive in finishing with two tries on Monday night football.

However, the inclusion of Cooper is a big boost for the Dragons’ defence, with Manly exploiting St George’s left-edge early ad often to damaging affect.

The Gold Coast Titans have named three returning first-choice players ahead of their clash with the St George Illawarra Dragons at Skilled Park. 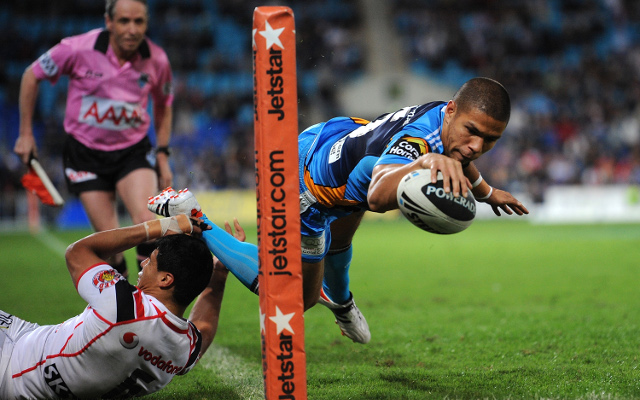 Ben Ridge also returns, pushing Mark Ioane to 18th man, Sam Irwin retains his place but is expected to make way for Matt Srama (finger fracture, round 11)  as he is due back soon.

Albert Kelly (concussion) is expected to play but will have to pass a fitness test later in the week.

Gold Coast’s momentum this season has stalled in the last fortnight after frustrating losses to Newcastle and New Zealand.

The one shining light in the past fortnight has been hulking centre Jamal Idris, who has started to recapture some of the form he showed when he burst onto the NRL scene with Canterbury four years ago.