Dragons come from behind to secure one of the best wins of the season.

The St George Illawarra have earned one of the more remarkable wins in recent NRL history, after coming back from 12 points down to win in golden-point extra time.

Playing the top side in the competition, the Dragons showed determination as they captalised on on a sluggish South Sydney side that was missing superstar Greg Inglis.

Having lost seven of their 10 golden-point games they had played in, a sensational run by Josh Dugan set up Mitch Rein to find an unmarked Josh Morris who scampered across, sparking wild celebrations by the Dragons at ANZ Stadium.

The loss for the Rabbitohs meant they still had not beaten Dragons on four consecutive occasions going back to 1933. 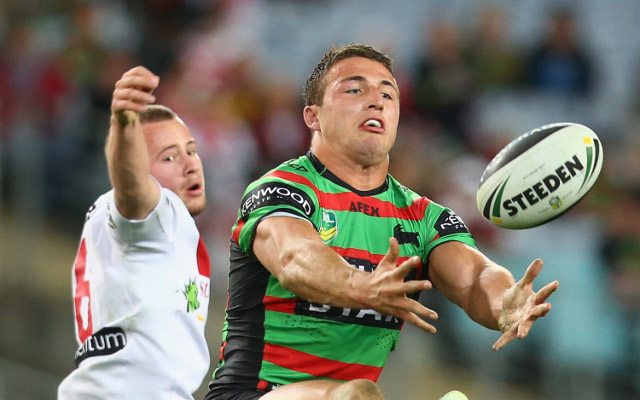 St George went on the attack early and made good ground against a Rabbitohs pack that has been very good in defence this season to date.

Dylan Walker scored the first for Souths with the four-pointer largely coming against the run of play 6-0.

Off the back of a penalty, Trent Merrin went close to scoring as he stretched out after bashing his way across the line.

However, the video referee ruled the Dragons lock was ruled to have lost the ball in attempting to ground it, keeping the side scoreless in the first half .

St George did well to keep the Rabbtiohs scoreless for the first 20 minutes, however, the top of the table side started to gain some momentum close to half-time. 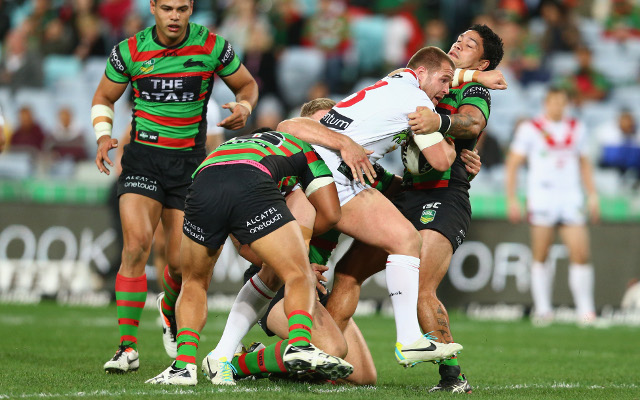 The absence of Inglis, due to a knee injury sustained in the third State of Origin game, cannot be underestimated.

The Rabbitohs got the perfect start to the second half when Adam Reynolds scored and converted from right in from the make the score 12-0.

After a toe injury kept Matt Cooper sidelined since round seven, the Dragons centre looked in trouble after landing awkwardly after jumping to take a bomb.

After taking his place back in the line, Cooper eventually succumb to his injury, which was diagnosed as a possible torn pectoral, which would mean his season and career is over.

Jack de Belin looked to be hurt by Roy Asotasi in a cannonball tackle with the Dragons given a penalty and the Bunnies prop was put on report in the 53rd minute. 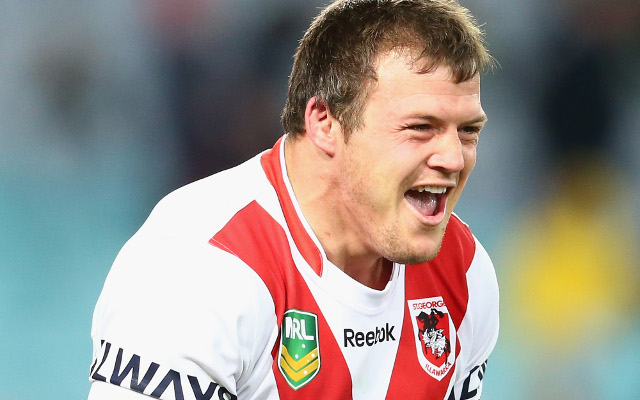 The Dragons began their comeback effort after a sensational team effort by the Dragons saw Brett Morris finish off a movement which saw the ball go through six sets of hands.

Second phase play created the gaps for the Dragons as they broke their 153-minute point scoring drought.

Chase Stanley slotted the conversion and the Dragons were back in the hunt to cause an upset at 12-6 with 20 minutes left in the game.

Off the back of the glut of possession, Sam Burgess bashed his way across the line, with the try ultimately coming from the Dragons failing to find touch just two minutes beforehand.

Reynolds slotted the conversion as the Rabbtiohs made the score 18-6.

Merrin would not be denied after having a try taken away from him in the first half, as the NSW player dived over from in close to make it a six-point deficit.

The Dragons had been tackled 41 times inside the Rabbtiohs’ 20 metre area before the try.

St George went back-to-back after a grubber through the line by Mitch Rein gave his side another set of six allowing Adan Quinlan to scoot across the line to even the scores up with six minutes left.

It was the first time the Dragons had scored twice in the last 20 minutes of a game in 2013. 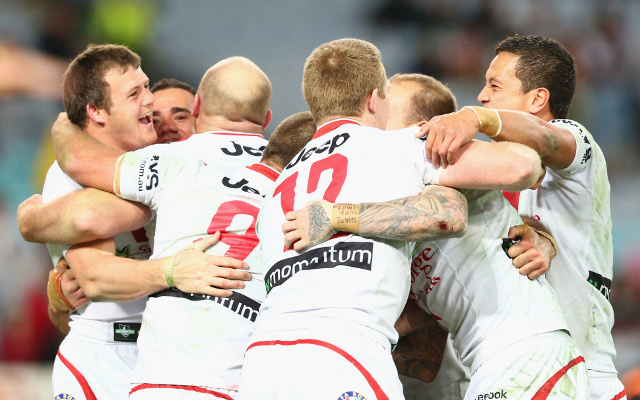 A questionable call of knock-on against Rein in the tackle gifted the Rabbtiohs a chance to hit back but Reynolds missed an easy chance at field goal.

Fien then attempted a shot at goal before being hit with a big shot by Reynolds, with the St George halfback down hurt.

Nathan Peats knocked on 20 metres out from his own line giving the Dragons eight seconds to try and score off the back of the scrum but snap field-goal was wide as the game went to golden point.

Another shot from Reynolds went wide, before Dugan and company broke the hearts of Rabbtiohs fans.