NRL leaders do not miss Origin stars as they thump misfiring Parramatta outfit.

Despite missing four of their front-line stars, the South Sydney Rabbtiohs have impressed in their 30-10 victory over the Parramatta Eels at a soaked ANZ Stadium.

With Greg Inglis, Nathan Merritt, Chris McQueen and Ben Te’o away on State of Origin duty, the Rabbtiohs showed they have the depth to win the premiership this season.

But the loss continues the season of woe for the Eels who continue to struggle as a unit as they stay rooted to the bottom of the ladder after their 11th loss.

Parramatta scored first despite the possession favoring the Rabbtiohs, when Ken Sio finished well in the corner despite desperate cover defence.

Sio has been the first try scorer for the Eels in the last four games in a row as they grabbed the 4-0 lead. 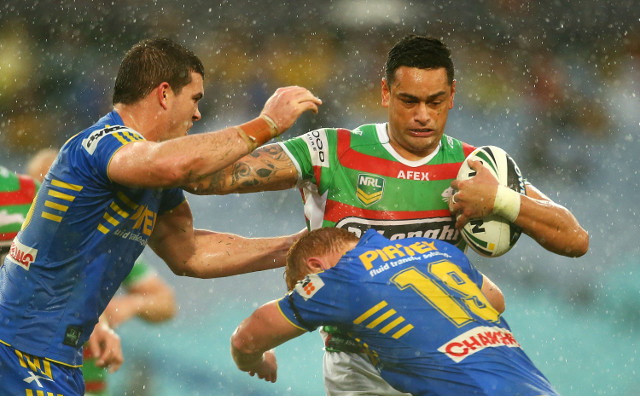 Souths’ defence dragged Ryan Morgan over the sideline 40m out from their own line, with Parramatta not helping their case after giving away a penalty.

As a result, Dylan Walker scored for Souths off the back of a grubber to see them hit back quickly on the scoreboard.

Adam Reynolds added the extras and South took the lead 6-4 after 17 minutes.

Tom Burgess made his debut for the Rabbitohs in the 23rd minute, making him the fourth member of his family to make the top grade in the NRL for South Sydney.

Reynolds looked to have scored after he sliced through the line, but it was denied by the video referee due to an earlier obstruction.

Souths extended their lead when John Sutton created doubt in the Eels’ minds as he stood in the tackle and offloaded, with a grubber kick again the method of delivery.

Dylan Farrell touched down as the rain continued to pelt down, with Reynolds adding the extras to give the Rabbitohs a handy 12-4 lead.

The Eels continued to give away penalties in dangerous positions as they were forced to get
through plenty of defensive work.

Souths’ halfback Reynolds picked up a left knee injury but he hobbled back into the line as he continued to street his side around well. 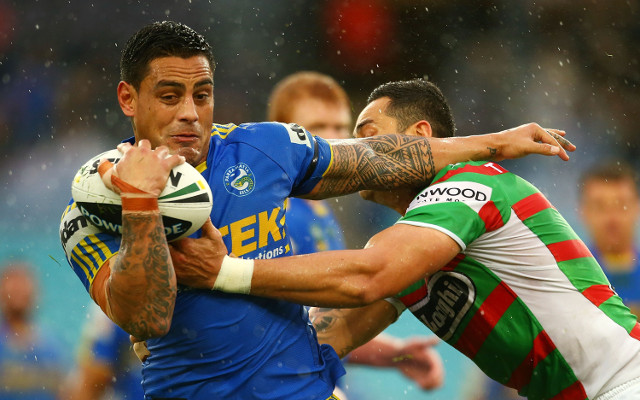 Justin Hunt gave the Rabbtiohs the perfect start to the second half as he touched down again off a Reynolds kick, to  give the home side an important 18-4 lead.

Sio earned his side an outside chance of a comeback win as he took an intercept pass to race 90 metres and scored, with the Sandow conversion making the score 18-10.

Reynolds scored largely due to soft defence by the Eels close to the line, as the Rabbitohs
put a 14-point margin on their opponents.

Souths all but put the result on ice as Issac Luke drew and passed close to the line, allowing man-of-the-match Sutton to cruise across the stripe to make the final score 30-10.

The Rabbtiohs retain their place at the top of the NRL ladder with the win, as they prepare to host the Canberra Raiders at ANZ Stadium in round 16.

Parramatta continue to struggle and are now two games behind the Wests Tigers in second last place, with the side getting some relief in having the bye next weekend.