Canberra Raiders continue their terrible away record after comprehensive loss.

The South Sydney Rabbitohs showed again why they are the favourites for the NRL title after comfortably beating the Canberra Raiders 32-2.

With the weather turning for the worst at ANZ Stadium, Souths controlled the ball in the hand better as they made the Raiders pay for their numerous turnovers and missed tackles.

Adam Reynolds again was one of the stars for the Bunnies as he guided the side around the park with aplomb, putting his name in the frame for State of Origin selection in the process.

Jarrod Croker gave his side the early lead off what was Canberra’s first penalty for the season, as they led 2-0 after five minutes.

Sam Burgess slid across on the wet surface to score the first try for the game off the back of a sniping run by Reynolds after he beat four Raiders’ defenders. 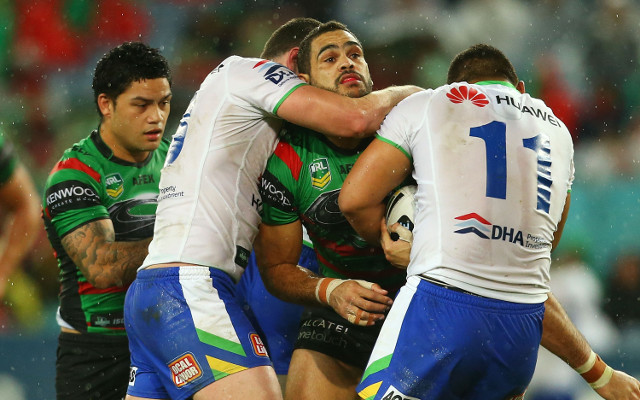 However, Canberra fans had reason to be upset about losing the lead after a forward pass by John Sutton in the previous tackle was missed.

Nathan Merritt, back on his customary left wing after having a shocking performance on the opposite of the field in State of Origin two, set up a linebreak to see Justin Hunt score in the right-hand corner.

Reynolds missed the conversion but the Rabbitohs had grabbed the ascendency in the clash.

The kicking games for both sides would prove crucial in the wet conditions and through the first quarter of the game, Souths through Reynolds and Issac Luke held the advantage.

Luke further pressed his side’s advantage when he crossed easily from dummy-half to give his side an important 14-point lead.

Souths’ backrower Ben Te’o picked up a lower left leg injury and was forced to hobble off the field in the 36th minute as the Rabbitohs took a 16-2 lead into the sheds.

In the first half Canberra missed 13 tackles compared to the Rabbtiohs (two), who were excellent in defence against a Raiders side that offered little in the way of attacking flair. 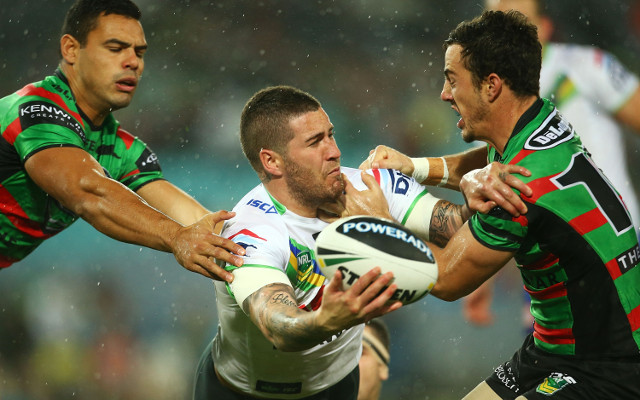 Raiders’ outside back Jack Wighton (abductor strain) did not take the field for the second half.

Canberra started the second half playing a more direct brand of football but their handling continued to let them down as the rain began to fall heavily.

Reynolds’ kicking game came into its element as the game wore on as he continued to find the in-goal from 30 metres out, forcing several line-drop outs.

Eventually the dam wall broke for the Raiders as Merritt scored off the back of a well-constructed
play to ensure the game was theirs to lose at 22-2.

Winger Sandor Earl suffered a dislocated elbow as the injury woes for the Raiders deepened.

Te’o rejoined the action with 18 minutes in what was good news for the Rabbtiohs, as they
continued to push for points off the back of their kicking game.

Bryson Goodwin sealed the win off the back of an easy play down the short-side to make it 26-2.

Dylan Walker scored a final try to complete the rout as the competition leaders continue to set the benchmark for the rest to follow.

South Sydney take on New Zealand in round 17 action next weekend while the Raiders will be keen to bounce back to form when they host the North Queensland Cowboys at Canberra Stadium.