Green Machine stun the Bunnies on the road.

South Sydney’s dismal start to the NRL season has continued with Canberra easing to a comfortable 30-18 win at Sydney’s Olympic stadium on Sunday.

The Raiders were full value for their win with Brisbane-bound full-back Anthony Milford in outstanding form as the Rabbitohs slumped to three successive defeats for the first time since Michael Maguire took over as coach in 2012.

A brace of tries from Reece Robinson and efforts from giant prop Dane Tilse and Milford gave the Raiders a 22-0 lead at half-time – the most points given up in a first-half by Souths since 2011.

In addition to some poor handling and a litany of errors, Maguire will be deeply concerned at the manner of the loss with his players second-best throughout to a Raiders side who looked more committed from the opening kick-off. 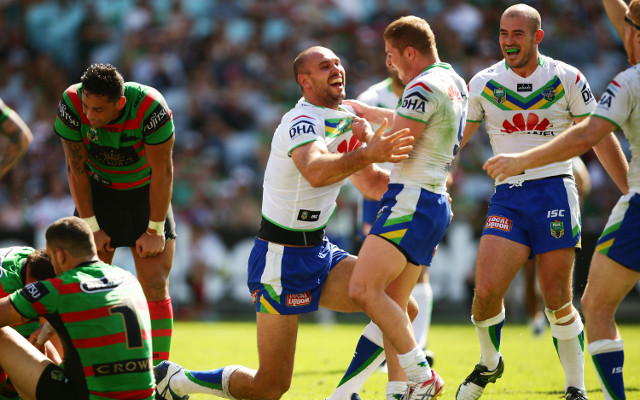 Dropped passes from Lote Tuqiri and Adam Reynolds both led to tries for the visitors, with Milford a constant menace from full-back and Terry Campese impressing at five-eighth for Ricky Stuart’s side.

Souths badly missed injured hooker Issac Luke and with the New Zealand international set for a long spell on the sidelines, Maguire must find a way of picking up his side ahead of next Saturday’s clash with St George Illawarra at the SCG.

The second half started positively for the Rabbitohs when Dylan Walker and George Burgess scored in quick succession to reduce the deficit and there were hopes of a fightback when Nathan Merritt looked to have scored a historic try.

However, an offside call by the video referee against Sam Burgess denied Merritt the chance to finally break Benny Wareing’s try-scoring record of 144 that has been held since 1933.

That setback appeared to knock the stuffing from the hosts and Jack Wighton iced the victory when he latched onto a Terry Campese kick and ran underneath the posts.

Jarrod Croker then kicking the extras, before adding a penalty from close range.

Souths did have the final say when Chris McQueen scored on the siren, but it merely papered over the cracks on a disappointing afternoon for the home side.