Latest victory has Rabbitohs fans wondering if this is their year for a premiership.

A late try to South Sydney forward George Burgess has sealed a 24-22 win for the Rabbitohs as they held off a determined New Zealand side at Mount Smart Stadium.

The win is the red and greens fifth from as many games this season, with the Rabbitohs showing they know how to grind out tight games.

Three of their victories to date have been by less than five points, with Burgess’ heroics in the 68th minute allowing the away side to hang on for the win.

South Sydney played from in front when try-scoring machine Nathan Merritt amazingly scored his eighth try for the season when he crossed in the ninth minute to lead 6-0.

A turnover by Konrad Hurrell gifted a scoring chance to South Sydney and star fullback Greg Inglis was happy to oblige as he scored his second for the year.

Sharp-shooting Adam Reynolds made it two conversions from as many attempts to double the Rabbitohs lead to 12. 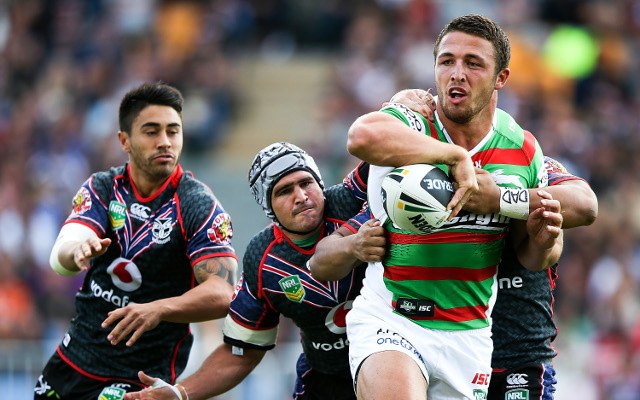 New Zealand crucially scored before the break when halfback Shaun Johnson created a break before setting up Ben Matulino to cut the lead to just six.

However, Souths showed why they are being considered one of the teams to beat for the title this year when they hit back straight away through Bryson Goodwin to open up a healthy lead 18-6 at half-time.

The Warriors continued to throw evetryhting they had at the Rabbitohs in the second stanza, and when Ngani Laumape sailed across the line, the result was back on the table at 18-10.

Amazingly the Warriors grabbed the lead when Hurrell and Pita Godinet score as the New Zealand looked desperate to string together back-to-back wins for the first time this season.

But Burgess pulled a rabbit out of a hat for South Sydney as they sealed their place at the top of the table after five weeks.

Despite the loss, New Zealand looked more like the side they are capable of being and they will look to carry over some of that confidence when they play the Canberra Raiders in round six.

While the high-flying Rabbitohs will lock horns with the Melbourne Storm in what should be one of the games of the year.