Return of playmaker cut short after dislocating his knee.

It was a bitter-sweet return to the NRL for Robert Lui with the halfback scoring in his return before being forced from the field injured in the North Queensland Cowboys big win against Penrith.

The Panthers were blown off the park in the opening20 minutes as they conceded four tries to the slick Cowboys side that was keen to make amends for losing three in a row.

However, the news just gets worse for Penrith coach Ivan Cleary and his side, who after losing four straight, are in the middle of their worst start to a season in 11 years.

While admitting his side were far from their best, Cowboys captain Jonathan Thurston said the 30-0 victory gave them some positives to move forward with.

“I think there were a few areas that had us under the pump, our turnovers put us under the pressure we just need to play simple, kick to corners and complete our tackles,” Thurston said. .

“When we able to score we held onto the ball and the big boys made some yards up the middle and we were able to play off the back of that.”

Penrith, who simply had no spark in attack for much of the game, were made to pay for the slow start according to hooker Kevin Kingston.

“That first half shut us down, the Cowboys are always tough at home, but we just didn’t aim up,” Kingston said,

“We just need to play consistently and play for 80 minutes, which are two things we aren’t doing at the moment.” 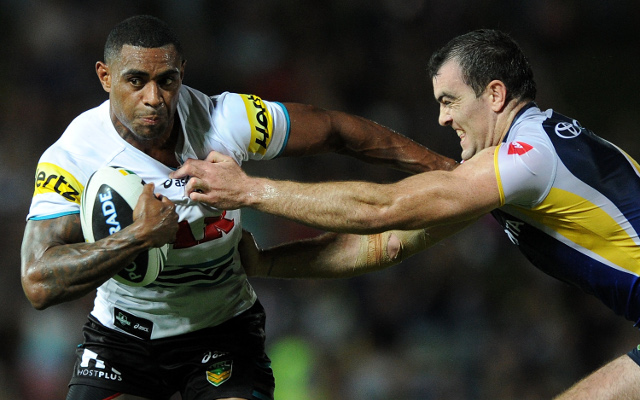 North Queensland began their shock-and-awe start to the game when Kalifa Fai Fai Loa stole the football out of the hands of Panthers fullback Dean Whare after a bomb to touch down.

Kane Linnett scored the first of his double soon after when he was on the end of a slick Cowboys movement as the homes side jumped out to a 10-0 lead.

The Linnett try would have been disallowed the previous weekend, but with the amended interference rule saw it chalked up to the Cowboys. .

Antonio Winterstein continued to pour on the pain for Panthers’ fullback Ware who was struggling under the high ball, as the Cowboys scored one of the easiest tries of the season to be 16-0 after just 11 minutes.

Penrith were competing through the middle of the field with their big pack of forwards, but everything
the Cowboys touched turned to gold.

Lui made it a perfect comeback when he cleaned up a split ball by the Panthers to make the score
22-0 after 18 minutes.

The Cowboys looked good with the ball in hand as Thurston, Matt Bowen combined well with their outside backs, but all of the tries had come about, largely, because of mistakes by the Panthers. 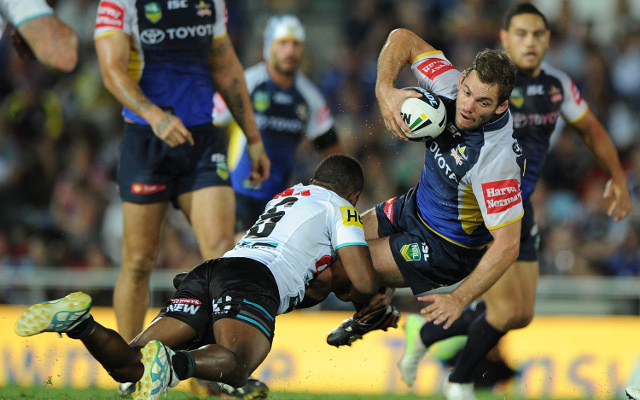 However, the home side suffered a blow when Lui was forced from the field just before half-time with what turned out to be a dislocated knee cap that will rule him out for at least two weeks.

The Cowboys poured on the pain for the Panthers after the break, when Thurston created a line-break to set up Linnett for his second to stretch the lead to 30.

Trailing dramatically, the Panthers attempted to throw the ball around to spark something in attack, but their bad night continued as handling errors crept into their game.

Cowboys looked to try and close out the game and send a message to the rest of the competition that they were not going to let their line be penetrated.

Josh Mansour began to look dangerous on the left edge in recording the Panthers’ first line-break at the 72nd minute mark, but every time the visitors looked to attack, an error halted their progress.

While the Cowboys did not finish the game off as well as they would have liked, the 30 point win give them some confidence heading into their traditional Queensland derby against Brisbane in round six.