Jonathan Thurston leads the way for the victors in a commanding performance.

The North Queensland Cowboys have secured their third win of the NRL season, after outgunning Canberra 30-12 at 1300 Smiles Stadium in Townsville.

Scoring five tries to two, the Cowboys simply had too much fire power against a Canberra side who gave away too much ball through penalties.

Against the run of play Canberra scored through Edrick Lee to score an intercept-try and Jarrod Croker’s conversion put the visitors in front.

After a repeat set the Cowboys crashed over through Glenn Hall, again showing the Raiders’ inability to defend several sets of tackles in a row, especially close to their own line.

Thurston slotted the conversion to give his side the lead for the second time at 10-6. 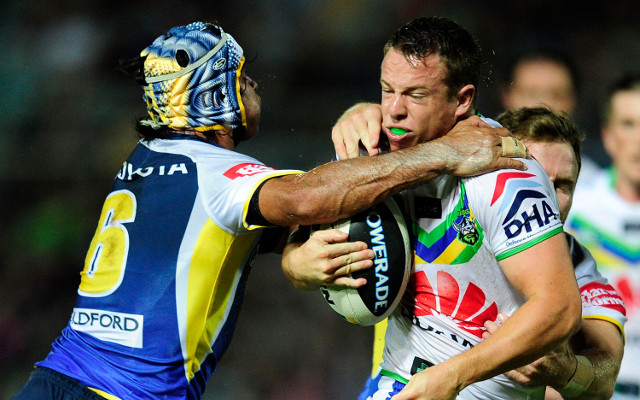 Not for the first time in their careers, Thurston went to the line and committed the Raiders defenders before putting through a grubber kick for Matt Bowen to score.

The Cowboys lead 16-6 after just 17 minutes with the final margin possibly anything.

Canberra continue to be their own worst enemies with turnovers and penalties gifting the Cowboys plenty of chances to score, but the 10-point margin remained at half-time.

A Tariq Sims line-break set up Michael Morgan to break the Raiders’ backs, as the score went to 22-6 with 15 minutes remaining.

Jack Wighton scored after the Raiders cleaned up a spilt bomb to keep their hopes alive for victory as they trailed by 10 with many minutes remaining.

However, a Thurston penatly ensured the Raiders needed to score more than twice in the final five minutes, sealing the win for the Cowboys.