Panthers left to count the cost in bruising game with several key injuries.

The Newcastle Knights keep their undefeated record at home intact this NRL season, but don’t expect coach Wayne Bennett to be too happy with their latest outing.

In an at times spluttering display, the Knights hung on to claim an ugly 8-6 win against the Penrith Panthers at Hunter Stadium.

Neither side was able to execute in attack for most of the game, reducing the contest to an arm-wrestle the Knights won due to making the most their limited opportunities to score.

Penrith have now won a single game from the opening six rounds and their job could get even harder with Matt Robinson (head/neck), Josh Mansour (ankle),Wes Naiqama (knee) and James Segeyaro (knee) and Cameron Ciraldo (hamstring) all failing to finish the game. 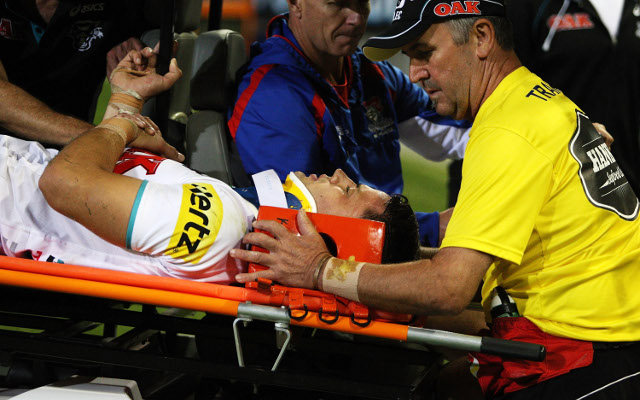 James McManus scored first and largely against the run of play for the Knights, after busting through some weak defence by the Panthers, the gallop 80 metres to score under the posts.

Despite playing in the game, word came through Newcastle five-eighth Jarrod Mullen would need minor knee surgery, ruling him out of contention for a Country jersey in the upcoming representative weekend.

Both sides racked up nine errors between them in the first 18 minutes to set the scrappy tone for the rest of the contest.

Scoring from a kick looked to be the only way the Panthers would cross the line, with their attack at times predictable and a lack of communications is also hurting their cause.

Newcastle captain Kurt Gidley elected to take the conservative route, with the skipper slotting a penalty despite knocking on the door of their opponent’s try-line, making the score 8-0.

Tim Grant looked to be over under the posts only for the try to be disallowed by the video referee, after two Panthers were ruled to have impeeded the Knights’ defence.

Chris Houston got through plenty of work for the Knights in the first half with seven runs for 66 metres and 12 tackles.

With the Knights leading 8-0 at the break, Penrith needed to buck the trend in the later stages of the games if they were to pull out a victory.

In the preceding three weeks, the Knights have outscored their opponents 36-2 in final 20 minutes and had 10 wins from as many games when leading at the change of ends.

Robbie Rochow was denied a chance to extend the Knights lead soon after the resumption, after an earlier knock-on saw his try disallowed.

Robinson did not have a happy memory for this first NRL game in 2013, after being taken from the field in a medicab, after suffering concussion from a heavy tackle. 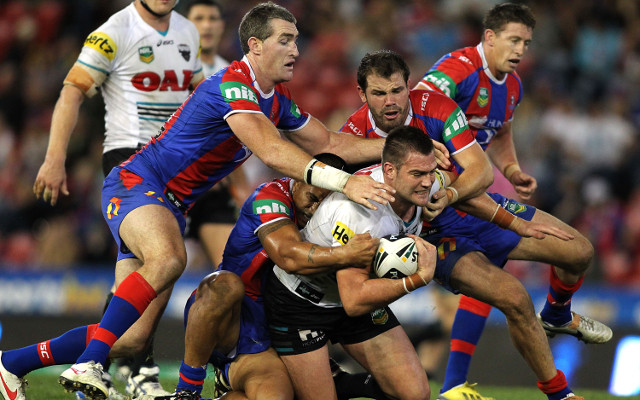 Jeremy Smith will have a nervous wait after he was put on report for his part in the tackle
on Robinson, with the officials citing it as a head-slam.

The injury woes for the Panthers got worse when Mansour was in serious pain after his left ankle was twisted awkwardly underneath him, which saw him eventually leave the field..

Penrith finally crossed when Sika Manu cleaned up a mistake by Newcastle fullback Darius Boyd, with the second-rower in perfect position to score under the posts to make it 8-6 in favour of Newcastle.

Manu’s try was the first points for the Panthers in 165 minutes of play, underlining their troubles in creating while in possession.

Akuila Uate sealed the win for the Knights when he bundled David Simmons into touch to cap an excellent night for the powerful winger.