A late try to the North Queensland Cowboys has failed to deny New Zealand its first win of the NRL season, as they hung on 20-18 at Mount Smart Stadium.

It has been a misfiring year to date for the Warriors, with new coach Matt Elliot unable to tap into the, at times, limitless potential in the New Zealand side.

However, the Warriors big players stood up when it counted to put away the Cowboys who have slumped to the same record as their opponents at 1-3.

After making the semi-finals last season, coach Neil Henry will come under increasing pressure if he is not able to get the Cowboys side to a similar mark in 2013, with poor discipline and a leaky defence plaguing their early season campaign. 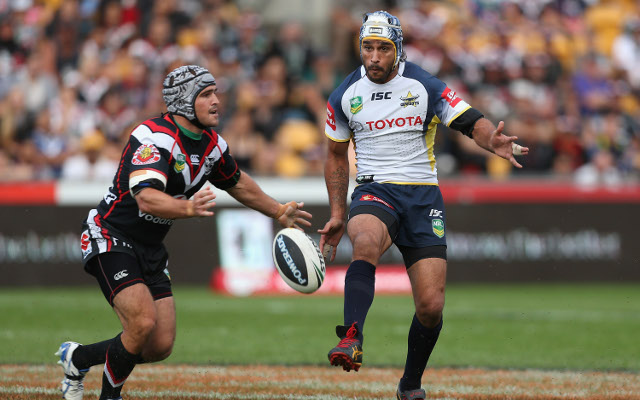 But it was the Warriors who ran out deserving winners in round four after their most inspired performance to date.

The visitors were first to open their account when winger Kalifa Fai Fai Loa made a spectacular dive for the corner to touch down just inside the sideline, with Jonathan Thurston’s excellent conversion giving them a 6-0 lead.

In a tight first half, Thurston elected to take the two points on offer after Todd Lowrie was penalised for holding a player down in the tackle.

The Cowboys looked set to continue the misery for the Warriors when Brent Tate sailed to the line as the margin grew to 12 before Elijah Taylor, playing at hooker, twisted his way across the line to score a vital try and make the score 12-6 at the break.

Warriors halfback Shaun Johnson continued the home side’s comeback when he scored his second for the season soon after the resumption, and when he added the extras, the scoreboard was locked up at 12.

After failing to see much of the ball in the first half, hulking Warriors centre Konrad Hurrell showed off his strength to put the men in black in the lead for the first as the game descended into an arm-wrestle. 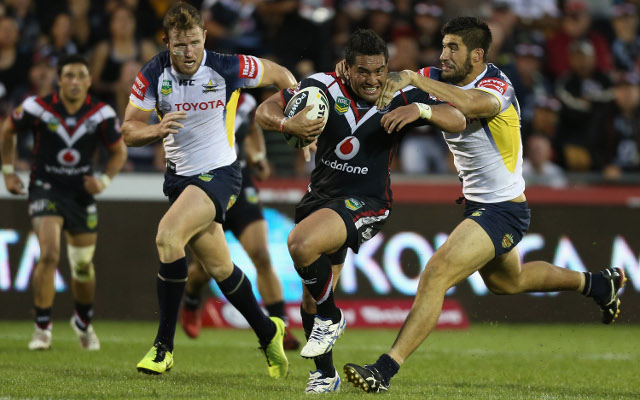 Despite both sides making their fair share of errors neither way able to convert pressure into points until a penalty goal by Johnson made it 20-12 with just three minutes remaining.

Antonio Winterstein finished  off the good lead up work by fullback Matt Bowen to keep the game alive for the Cowboys, but the clock beat them as they slumped to their third loss in a row.