Premiers show they are again the team to beat in the NRL.

If anybody doubted the Melbourne Storm’s ability to win back-to-back NRL titles, they only need to look at their play against South Sydney at ANZ Stadium.

Facing the only side capable of challenging the Storm’s title as the competiton’s best just six weeks into the season, Craig Bellamy’s men took everything the Rabbtiohs could throw at them and kept coming forward.

Superb defence combined with excellent play from the ‘big three’ of Cooper Cronk, Billy Slater and Cameron Smith make the Storm a rugby league machine that could see it placed alongside some of the game’s best.

However, Storm five-eighth Gareth Widdop made yet another strong case for the ‘big three’ to become the ‘the fantastic four’ with his sensational display.

“That was a really tough game physically and the pace of the game and their ability to throw the ball around, they will be tough to beat during the year,” Cronk said of Souths after the game.

Souths star Sam Burgess said his side would look at the silver lining of pushing the champions, particularly, late in the second half.

“They took their opportunities better than we did tonight, we didn’t execute as we did this week at training,” Burgess said.

“Full credit to them they are a great side but we are improving and we’ll have the week off.

“We try and take something from everything game, some good and bad, but we’re still improving and the squad is improving.” 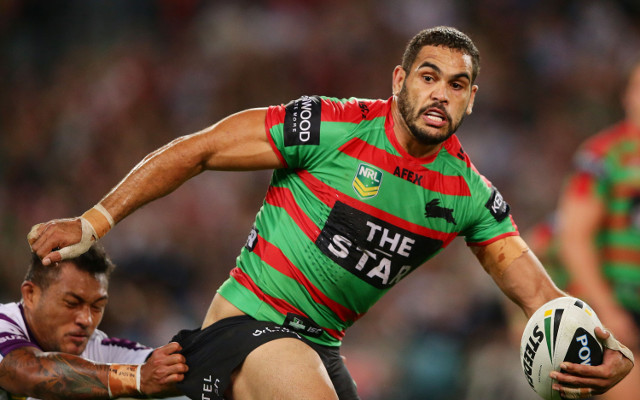 Souths were looking to start a season 6-0 for the first time since 1971, coincidentally the last time they won the premiership.

The Storm looked to use the short side early in the game, and it gained easy metres for them as they marched downfield with the contest having the intensity of a final, not of round six.

Melbourne showed better intensity early in the game as they ground their opponents into the ground, earning five early drop-outs.

And finally the pressure told, as Cronk combined with Ryan Hinchliffe who off-loaded for damaging wide runner Kevin Procter as Smith added the extras for 6-0.

The Storm did not allow Souths halfback Adam Reynolds any time with the ball in hand as they rushed up in a bid to damage his decision making.

In the shadows of half-time, South Sydney camped deep inside the Storm’s half but their attacking raids met an equally determined Melbourne defensive line. 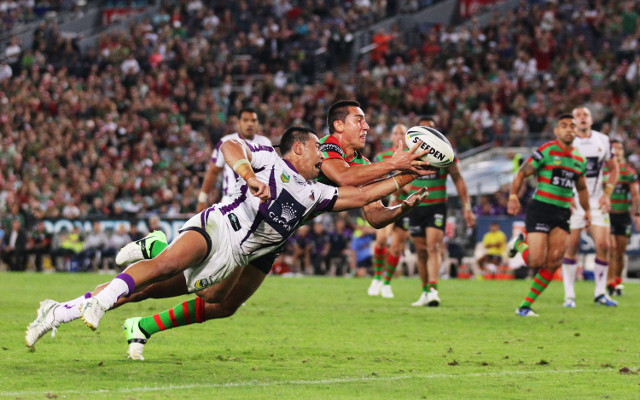 Try saving tackles by Widdop and Slater against Beau Champion and Nathan Merritt respectively kept the home side to nil despite a glut of possession deep in the Storm danger zone.

A Merritt mistake on his own 40m, which was the first uncompleted set for the Bunnies for the game,
led to Cronk chipping to Mahe Fonua to score making it 12-0 at half-time.

The second try to Melbourne was a body-blow for South Sydney, given the Storm’s communication and organisation in defence during the first 40 minutes

After the resumption, Inglis signalled the Rabbitohs were back in the game after he grounded a chip kick from Reynolds to make the deficit just six.

The lead-up was set up by the Rabbitohs forwards who punched alarming holes in the normally water-tight Melbourne defence.

Widdop showed his strength down the short side to catch the Rabbitohs defence napping to score a vital try to make the score 16-6. 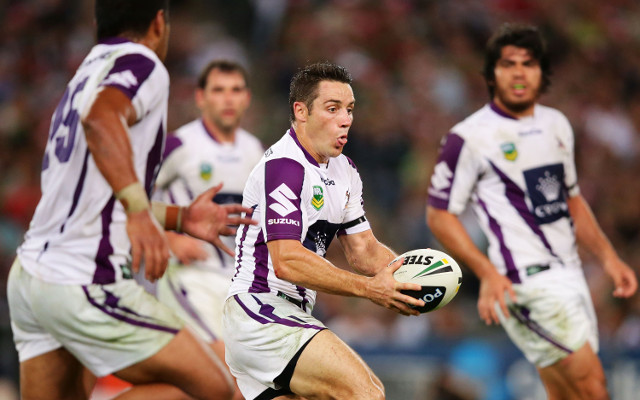 Reynolds inspired his side when an ad-lib chip kick resulted in a penalty 30 metres out from the Storm line with Andrew Everingham diving across in the corner.

Cronk then showed his awareness to slot a field goal with three minutes remaining to make the task very hard for Souths.

Souths showed they still had some fight in them, with Merritt making a break leading to Slater being sin-binned for a professional foul for tackling the Rabbitohs winger without the ball.

But the last chance for the red and greens slipped between their fingers when Jeff Lima spilled a flat pass close to the line.