Premiers again show they can win even when they are not performing at their best.

The Melbourne Storm scored three tries in 10 minutes to knock the wind out of the Wests Tigers and maintain their undefeated start to the season, after running out 26-12 winners at AAMI Stadium.

Wests played well for the first 65 minutes with a performance that would have finished off many other sides in the competition.

However, the Storm showed why they have been the benchmark in the competition
over the past seven years, as they performed when it mattered.

In a sign of just how tough they are to beat in Victoria, the Storm have only lost two out of 135 home games when they have conceded less than 16 points.

Making matters tougher for the Tigers were their 14 penalties given away, reinforcing the side’s reputation as the most penalised in the competition.

The extra possession, especially at the end of the game as the Tigers’ forwards faded, proved too much as the Storm sealed the win.

Wests suffered a blow before the game when Liam Fulton was ruled out of the run-on side due to a knee injury suffered at training. 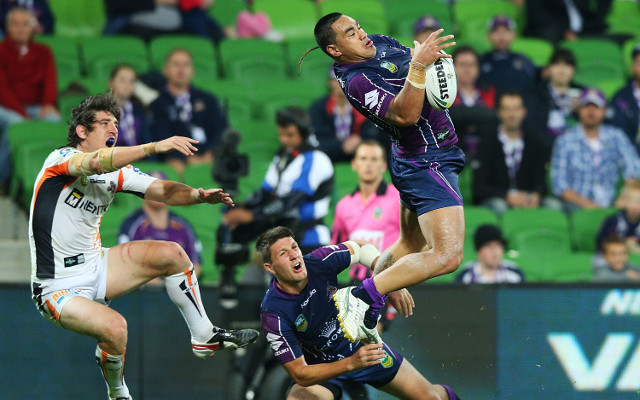 The Tigers looked to play Melbourne’s style of game as they drove the ball into the corners in a bid to make the Storm cart the ball out of their own half.

In a hap-hazard lead-up, the Tigers scored first when Robbie Farah saw plenty of space behind the Storm line, and his grubber allowed James Tedecso to fly through the ground the ball, making it 4-0.

Benji Marshall got up limping after a tackle with what turned out to be a toe injury, but it would not be enough to see him taken from the field.

Farah was warned about his side slowing the ball down close to their line, but despite a run of penalties against them, the Tigers were cool under pressure to defend their line.

The Tigers forwards then took the fight to the Storm big men as they made easy metres up the middle of the field.

The margin grew when a Ryan Hoffman turnover led to a penalty in front of the posts with Braith Anasta slotting it to make it a converted try lead for the visitors.

The Storm threw everything they had at the Tigers late in the first half with Siosaia Vave scoring, but lucky to have it awarded after surviving a video referee decision to make it six-all.

The game was set up for a classic battle in the second half with the Storm off a fraction with their performance.

However, the Tigers, especially their forward pack, did not take a backwards step with Tedecso
showing his talent with stints at fullback after being named on the wing

Eddy Pettybourne looked to have given the Tigers the  lead when he grounded the ball.

However, it was ruled no try when a second Tigers player was ruled to have taken Vave out of the play in what was a very harsh call against the Tigers

A rushed kick by Farah saw the Storm spill the ball allowing Ben Murdoch-Masila to off-load a questionable pass to Marshall for the try, and when Anasta converted from the sideline the score was 12-6 Tigers. 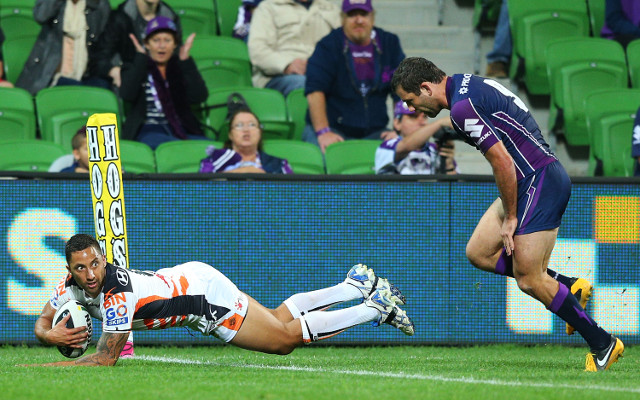 Adam Blair was placed on report in the 60th minute for twisting a leg in a tackle with the distraction proving enough for Billy Slater to set up Mahe Fonua who slid over in the corner making it 12-all with 17 minutes remaining.

But in the blink of an eye, Will Chambers busted the Tigers’ left-edge before setting up the try for
Cooper Cronk in what was a body-blow for the visitors who had been excellent defensively to date.

But the ability for the reigning premiers to turn the momentum of the game in a matter of
minutes continued to shine through.

From close range Smith hit the right-upright but the ball bounced through to make the
score 18-12.

The Storm wrapped up the game when an intercept 20 metres out from their own line resulted in Sisa Waqa scored out wide to make it 24-12 with a penalty as time wound down adding to the victory.