Controversial suspension overturned ahead of a crunch game for both teams.

With the club suits back in the wardrobe, the Melbourne Demons hope the successful appeal of Jack Viney’s rough conduct charge can pave the way for an on-field triumph.

On Saturday night they face the Western Bulldogs on their only excursion to the MCG this season.

Viney had been suspended for two matches over a clash with Adelaide’s Tom Lynch, but the decision was overturned on appeal last night.

In the aftermath of the verdict, both Viney and captain Jack Grimes opened up on the draining influence of a week spent at AFL House.

The man at the centre of the conflict said the last few days had been “really stressful”.

“I wouldn’t say it was one of the toughest moments … but it was fatiguing and added an extra challenge for my preparation,” Viney told the club’s website.

For Grimes, the appeal victory hopefully meant a return to normality.

“It was amazing to see how big news it was,” Grimes said.

“Coming to the club was almost an escape from it.”

The Melbourne co-captain counted himself within the overwhelming number of footy fans bemoaning the loss of toughness from the game.

“To see him get off, it’s restored a lot of people’s faith as to where the game is heading,” Grimes said.

“Viney plays hard, he plays tough and that’s the way footy should be.”

The AFL says the Viney case sets a precedent for similar matters before the tribunal.

“So if we’re now correctly looking at something that says, ‘is there an election to bump?’ I think we’re better informed on that front.” he said.

Somewhat lost in the debate was the importance of Viney to Melbourne’s young midfield.

The 20-year-old has had at least 20 touches in his last four matches, backed up by a strong tackle and inside-50 count.

He will be a key figure against the Bulldogs for the Demons who have bolstered their defence by recalling Colin Garland while the Bulldogs have made three changes. 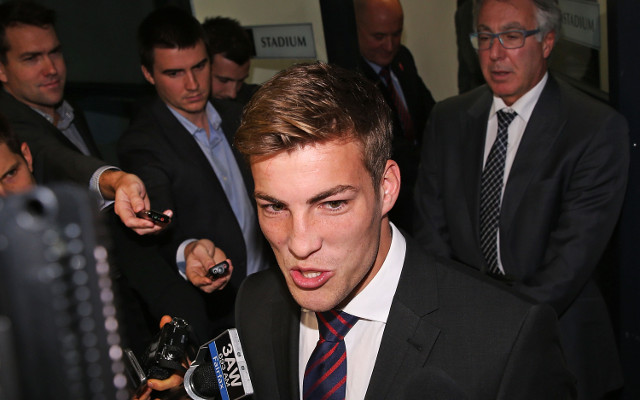