Manly get one over their arch-rivals in round four of the NRL season.

The Manly Sea Eagles have made up for some of the heartache caused by the Sydney Roosters in last year’s NRL grand final, beating the premiers 8-0 in a gripping clash at Allianz Stadium.

Ball control and structure at times was not what would be expected from two of the best teams in the competition, but that did not take away from the guts on display.

The Sydney Roosters won all five games between the sides in 2013 including the final game of the season.

But thanks to sheer weight of possession, with Manly being tackled 48 times in the Roosters’ 20 metre area, Sea Eagles coach Geoff Toovey and his side walked away with the two points.

To start the game, Sydney looked to have gone close to opening the scoring when Boyd Cordner ran a strong line off the  hip of Mitchell Pearce, only to pulled down just short of the line.

Both sides were guilty of errors early in the game, with passes going well wide of their mark and kicks from players such as Daly-Cherry Evans, far from being weighted correctly.

Despite the errors, the Sea Eagles began the game with plenty of energy which was a complete turnaround from their sluggish effort against Parramatta last weekend.

The Roosters right edge defence was tested early and often from the likes of Kieran Foran, who was a late inclusion into the side having passed a fitness test.

Jared Waerea-Hargreases was placed on report for a high hit on Glenn Stewart in the 19th minute and Jamie Lyon slotted the penalty kick to give his a 2-0 lead.

Stewart was taken from the field looking groggy and was in doubt to return to the field. 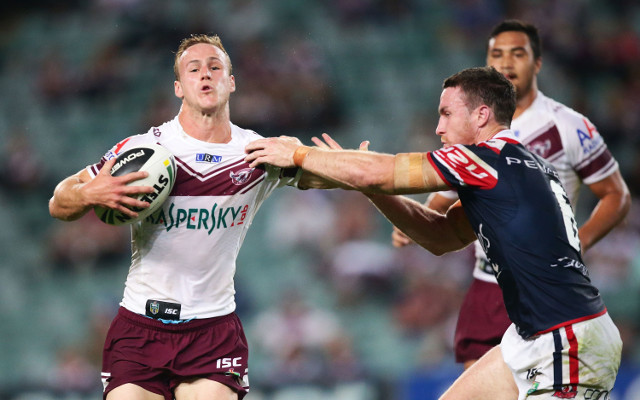 After getting their fifth penalty for the half, Manly scored their first try for the game as Cheyse Blair sliced through to make it 6-0 after the missed conversion by Lyon.

Steve Matai looked in injury trouble in the shadows of half-time as he struggled to stay on the field with a leg complaint.

Regardless, the Sea Eagles continued to batter the Roosters’ try-line thanks in large part to their fifth goal-line dropout of the half.

However, they could not crack the line before the break, as they took a 6-0 lead into the sheds.

Sydney Roosters coach Trent Robinson said his side needed to simply control the ball better when they had it and get back into the arm-wrestle. 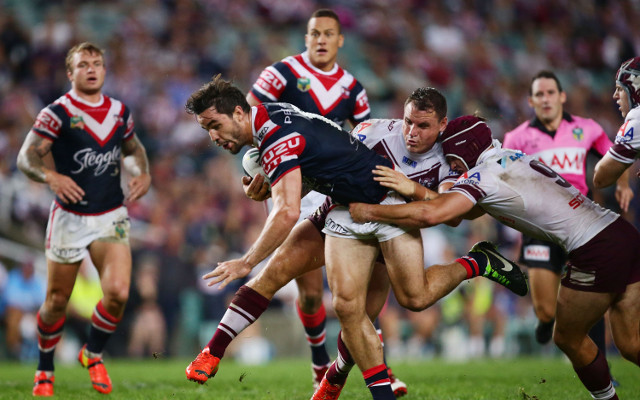 Cherry-Evans went close to pulling off one of the tries of the season just after the resumption.

After surging downfield from a slicing run, the halfback chipped the ball over Anthony Minichiello only to see the bounce elude him.

As the penalty count continued to blow out in favour of the Sea Eagles, with eight coming in 55 minutes compared to the Roosters’ two, Robinson’s men were asked to get through
plenty of defence.

Despite the lack of points the game had the feel of an elimination final rather than an early season clash, both sides stood toe-to-toe slugging it out.

Jamie Burhrer knocked on at his own 40 metre line and the tri-colours launched their most promising attacking raid of the second half but Michael Jennings knocked the ball on as he looked to reach out to the line.

Peta Hiku had his first real mistake of the night when he dropped a bomb with just eight minutes remaining.

And the Roosters scored through Daniel Tupou in the corner, but the play was sent to the video referee for a possible obstruction.

Under further review, replays showed the Manly players looked to have rushed up and out, but the on-field decision was upheld with Pearce ruling to have run behind his own runner in what could be the biggest call of the game.

Both sides threw caution to the wind in the final two minutes with any structure from the previous 78 minutes going out the window in a hectic finish to the game.

The final nail on the Roosters coffin saw James Maloney panelaised for an accidental off-side, with Lyon running down the clock and adding two points to their score.