NRL clash features one of the tries of the season.

The Manly Sea Eagles have moved up into third on the NRL ladder after their 34-18 victory over the Wests Tigers at Cambletown.

Wests Tigers were at times their own worst enemies with turnovers costing them a chance of celebrating Robbie Farah’s 200th game and Liam Fulton’s 150th.

David Nofoaluma grounded a ball after a mad-scramble after the Sea Eagles let a bomb bounce, with the video referee ruling there was enough doubt in the lead-up to deny them the first points in the game.

Cherry Evans dabbed a grubber through the Tigers’ line allowing Justin Horo to beat defenders to the ball to ground it under the posts to give his side a 6-0 lead.

Nofoaluma would not be denied soon after, as he scored one of the most acrobatic tries ever seen by a winger in the NRL, as he caught the caught a chip before grounding the ball while most of his body was outside the field of play.

Benji Marshall slotted the sideline conversion and the score was all locked up.

Soft defence by the Tigers on their right-edge, Steve Matai busted through the line as he gave the Sea Eagles a four-point lead.

Tim Samona bolted 80 metres from his line after cleaning up a chip-kick before the Tigers earned a penalty for the Sea Eagles being off-side.

Amazingly the Tigers missed a chance to score only to see Lyon race 90 metres in the opposite direction to score under the posts.

The previous two minutes was one of the more hectic plays in the NRL this season, as the home side missed a golden chance to get back into the game.

Lyon converted his own try to make the margin 10 in the lead-up to half-time. 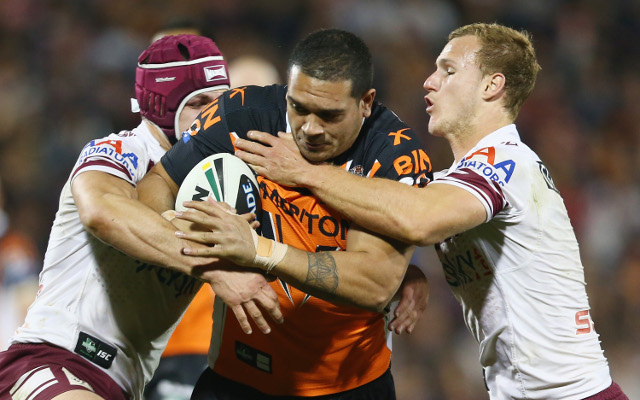 The Sea Eagles continued to bleed penalties after the break with their eighth for the game, but a lack of ball of control by the Tigers meant they were unable to make the most of the extra advantage.

Officially the game had everything when the home side won a scrum ahead against the feed.

However, Lyon scored his second for the night soon after another Tigers’ mistake which saw David Williams clean up the spilt pass, as the visitors took a stranglehold on the game at 22-6.

Wests were as much their own enemy as their completion rate hovered at 17-26 with 30 minutes left.

Horo crossed out wide after a chip kick to the corner was batted back after Jorge Taufau was tackled in the air, and the green light from the video referee saw the score blow out to 28-6. 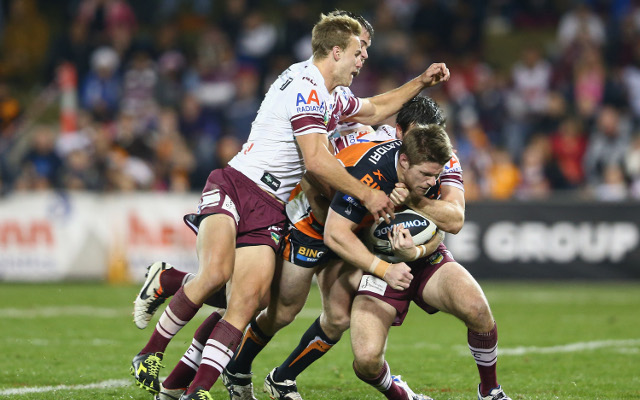 Fittingly for Tigers skipper Farah, he scooted over from dummy half to score under the posts to give his side something to smile about.

Farah’s 52nd try for his career saw the margin narrowed, but the Tigers still had plenty to do with the
margin 16 with 24 minutes left.

Matai left the field with a bruised hip and Geoff Toovey did not risk his centre for the rest of the game.

However, the clash sprung into life when Wests scored back-to-back when Simona slide across in the corner, off the back of good lead-up work from Curtis Sironen.

Marshall’s conversion hit the upright and bounce over as the score became 28-18.

Lyon landed a crucial penalty to make the margin 12 with just 11 minutes remaining.

And there was to be no fairytale comeback for the home side as Cherry-Evans, sliced through to run around and score despite on-going concerns of a ankle injury.