Home side run in 10 tries in the most lop-sided NRL game this season.

The New Zealand Warriors season has gone from back to worse after a record-breaking 62-2 loss at the hands of the Penrith Panthers at Centrebet Stadium.

The 56-point thrashing was the Panthers second biggest win in club history while it was easily the darkest day for the Warriors as their opponents ran in 10 tries.

The win was sparked by former Warriors playmaker Isaac John (three tries) and Lewis Brown (two tries) and a perfect kicking display from halfback Luke Walsh, who slotted 11 from 11 for a personal haul of 22 points. 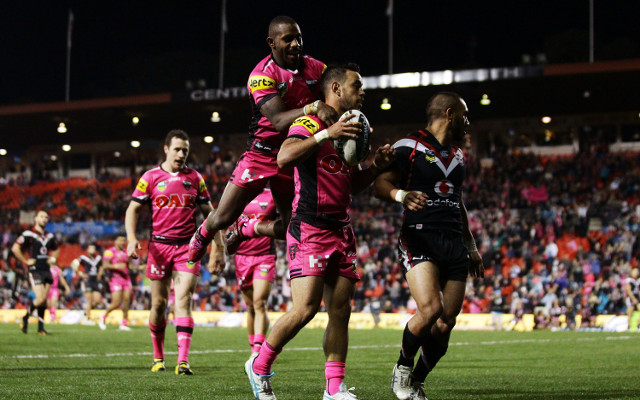 It was a game to forgot for more than one reason for Warriors coach Matt Elliott, who returned to his former club for the first time since he coached the Panthers in 2011.

Penrith raced out to a 26-0 lead at the break and the game was over as a contest from then on, but the Panthers did not let up.

The continue to punish the wayward Warriors, who completed just 15-27 sets while gave away a staggering 13 to three error count.

In all, seven Panthers got their name on the scoresheet – in addition to Brown and John, Travis Robinson, James Segeyaro, David Simmons, Matt Robinson all crossed and even skipper Kevin Kingston notched his first of the year.

The Panthers fans sunk the boot in further when Many Vatuvei scored in the dying seconds, with the small crowd on hand booing the visitors for avoiding the whitewash.

The Panthers have now earned two wins in a row and will look to make it a hat-trick when they travel to play the St George Illawarra Dragons in round 11.

New Zealand will simply be in damage control this week as they aim to stay off the bottom of the ladder when they host the Newcastle Knights in what is a must-win game, or their season could be over in just over two months.