Eels let golden chance for their third win of the NRL season slip through their fingers.

The Gold Coast Titans have used one of their ‘get out of jail free’ cards early in the NRL season, after storming home to beat the Parramatta Eels 28-22 at Skilled Park.

Trailing by as much as 14 mid-way through the second half, the Titans outscored the Eels 20-6 in the final quarter of the game to secure their fourth win of the season.

Capping the amazing comeback was Titans’ playmaker Albert Kelly, who was a shock inclusion in the side after overcoming a knee injury, who scored with eight minutes remaining.

Kelly scored off his own bomb after the ball took a deflection from teammate Luke Douglas, after the waiting Eels’ defence let the ball bounce. 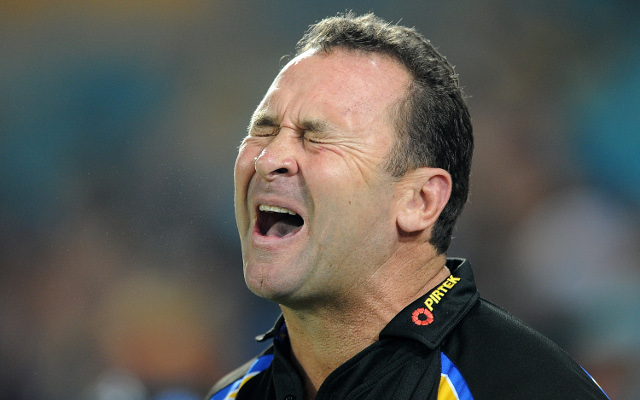 The play summed up the result for the Eels who left Queensland with nothing to show for what was overall an excellent and physical effort by them.

Eels captain Jarryd Hayne pulled off a stunning leap to give his side its biggest lead of the night in the 49th minute, when he pulled down a bomb to make the margin 14.

However, that try sparked the return of the Titans as they scored through Ashley Harrison, Mark Minichiello and Kelly to seal the important win.

Parramatta did themselves no favours in the penalty count, which saw them hit with 12, three times as many as the Titans.

However, after being humiliated by the Sydney Roosters 50-0 two weeks ago, coach Ricky Stuart and his side have some momentum as they tackle the Penrith Panthers, North Queensland Cowboys and Brisbane Broncos in the next three weeks.