Canterbury Bankstown celebrated the return of two of their stars with a record win against a patched up Wests Tigers out by 40-4 at ANZ Stadium.

Buoyed by the return of props James Graham and Sam Kasiano, the blue and whites ran in seven tries to one to lead from siren-to-siren.

Both Graham and Kasiano had been out of action since the Bulldog’s loss to the Melbourne Storm in last years grand final, but their impact was immediately felt.

The pair helped gain valuable metres up the middle of the field as the outside back for the Bulldogs created line-breaks almost at will. 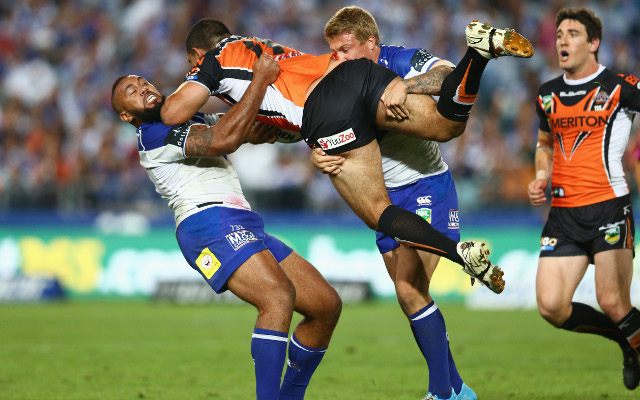 Josh Reynolds again gave an excellent account of himself from five-eighth and reminded New South Wales selectors he could look good in a sky blue jumper in time for this year’s Origin series.

Without seven of their senior players due to injury, the young Tigers side simply could not repel the attack of the Bulldogs.

Benji Marshall did return for Wests after a toe injury but he was well below his best.

Canterbury’s right edge had a field day with Sam Perrett scoring a double, while Tim Lafai set up two tries and scored one himself.

It is the Tigers’ fifth loss in a row as they slump towards the bottom of the ladder.

The story is different for the Bulldogs who have captured back-to-back wins for the first time this year as they creep towards the top eight after two months of the season.