The Canterbury Bulldogs picked up their sixth win of the NRL season by knocking off the St George Illawarra Dragons 16-14 at ANZ Stadium, but not without the result being tinged with controversy.

With time running down, Dragons fullback Josh Dugan put in a chip kick before being take out of the play late by Frank Pritchard.

Bulldogs fullback Ben Barba cleaned up the ball before racing 80 metres to score, which gave the referees reason to go back and double-check Pritchard’s tackle.

The Dragons were then given a penalty 35 metres out from goal after the final siren to send the game into extra time, but Jamie Soward sprayed the attempt wide and the home side hung on for the important win.

St George were lucky to be in a position to steal the win possibly at the death, as the Dragons lacked spark in attack for much of the game. 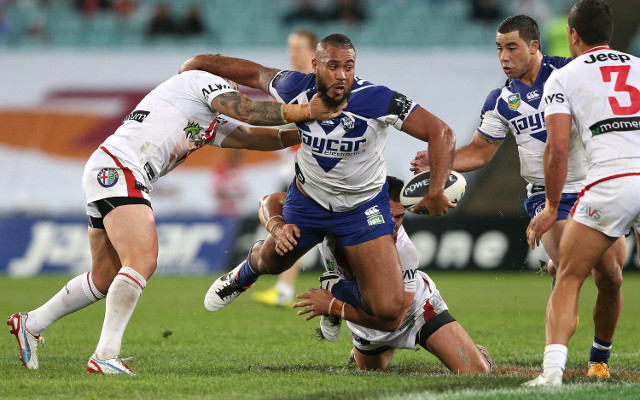 Canterbury opened the scoring through centre Tim Lafai, who survived a  video referee ruling for obstruction to make it 6-0.

Leeson Ah Mau was put in report in the 27th minute for a high shot on Aiden Tolman when he left his feet and hit the Bulldogs prop with his shoulder.

Lafai scored his double after receiving a perfect tap back from Dury Low on the wing,
in what was a well-executed play.

Another excellent conversion saw the Bulldogs earn a well-earned 12-point lead in the run down to
half-time.

St George had not score in more than 110 minutes and they again offered little to challenge the Bulldogs defensive line, with simple plays being contained by the much bigger opposition pack.

However, the Bulldogs turned over the ball over seeing Jamie Soward scoot across
the line to score out wide.

St George then got an extra bonus when Barba was ruled to have come in late  with his knee on Soward when he scored the try, resulting in a rare eight-point try.

The sudden turn around saw the Dragons close the gap to just four and undo much
of the good work by the Bulldogs in the first half.

As a result of the hit, Barba was placed on report and might have a case to answer from
the evidence supplied from the copious replays. 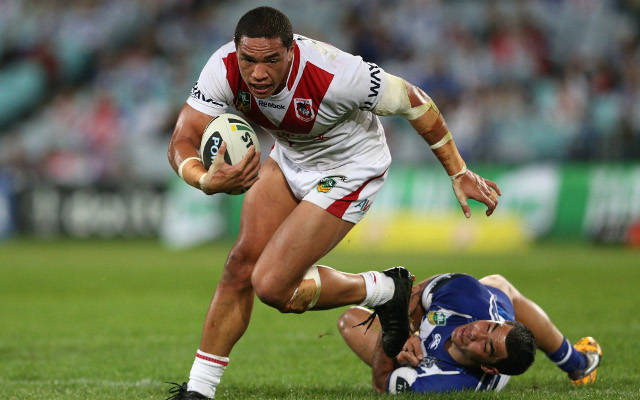 Canterbury looked to have scored early in the second half but the final pass to Low
was ruled forward, letting the Dragons off the hook.

The Bulldogs got their third try for the game when the blue and white side shifted the ball to the right wing where Sam Perrett stayed inside  the touch line to give  his side a 16-8 lead.

A try St George’s Matt Prior brought his side back to within two points with less than five minutes
remaining which put the result back on the table.

The Bulldogs had looked to finished off the game when Barba counter-attacked 80m but the on-field referee sent the decision upstairs after Pritchard was ruled to have taken out Josh Dugan after a kick.

As a result the penalty to St George was pushed wide by Soward, seeing them fall just short by two
points.

Canterbury will play North Queensland next weekend possibly with out State of Origin star Jonathan Thurston, while the Dragons tackle Newcastle at Hunter Stadium.