Bad boy turns season and career fortunes around in quick-time.

Blake Ferguson has taken his second chance with the Canberra Raiders and run with it, after the club announced they had re-signed the outside back through to 2015.

Earlier this season Ferguson was stood down alongside sacked superstar Josh Dugan for his part in breaking team alcohol rules.

Since his return to the field, Ferguson has been one of the Raiders’ best and his two-try man-of-the-match performance against Melbourne last weekend put the cherry on top of his new deal with the club.

His form has been so good in fact, with the knee injury to St George Illawarra’s Brett Morris, Ferguson has been mooted a s possible darkhorse to make the NSW Origin side.

Canberra will be out to continue their impressive form going when they host the Newcastle Knights in round nine this weekend.

The Raiders outplayed and out-coached the reigning premiers Melbourne to record an impressive 24-20 victory, which put them knocking on the door of the top eight.

But if they are to crack the top half of the ladder this weekend they will need to do it without stars Tom Learoyd-Lahrs (foot, indefinite), Jarrod Croker (knee, Rd 11-13) and Glen Buttriss (finger), Josh Papalii (knee) and Joel Thompson (toe), who are all due back in rounds 10 or 11.

Helping Canberra’s cause this weekend is the loss of Newcastle halfback Jarrod Mullen to a knee injury. 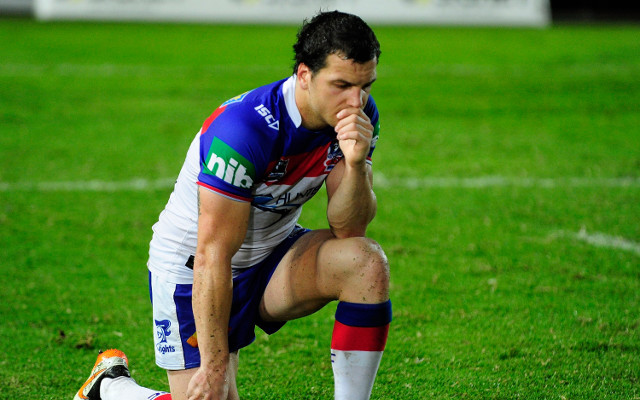 It was feared Mullen would be out of the side for several weeks, but he has since been cleared of any  structural damage and will miss this weekend due to bone bruising.

His place in the side has been taken by captain Kurt Gidley who will play five-eighth with Tryone Roberts to wear the number seven jersey while Matt Hilder and Neville Costigan have been added to an extended bench.

Newcastle has already recorded a victory against Canberra this early in the season, when then Knights beat the Raiders 28-12 in round four.

The home side Knights scored 18 unanswered points in the second half to storm home against a wasteful Raiders side, with Roberts starring for Newcastle.