the Brisbane Broncos have secured the two points in an unconvincing fashion against a depleted Wests Tigers outfit 20-10.

Despite having much of the possession for the game, the visitors to Cambletown failed to land the knockout punch until the closing minutes.

While the new for the Tigers goes from bad to worse with injuries to Tim Moltzen (knee ACL), Chris Lawrence (hamstring) and Blake Ayshford (possible broken leg) rounding out a miserable night for the home side. 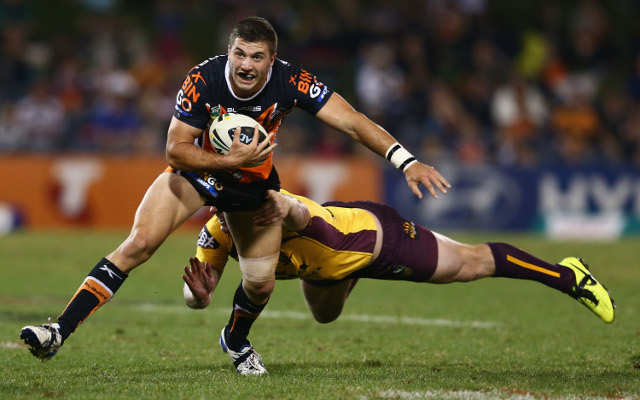 Despite their lacklustre play for much of the game, Brisbane started with a bang when Corey Norman poured into a hole on the Tigers’ right edge and he sailed across the line to open the scoring for the Broncos.

Brisbane were over again through Matt Gillett as the Broncos made the young Tigers side
pay for their mistakes early in the own half.

Penalties galore by both teams granted field position, with eight being called in the first 22 minutes, as Brisbane enjoyed 62 per cent of the ball through.

Eventually the dam walls broke and Gillett scored his second for the half, as he showed great strength to fight off three Tigers’ defenders.

Scott Prince relieved himself of the kicking duties after missing the first two, with Corey Parker
splitting the uprights to make it 14-0.

Wests were not tackled inside the Brisbane 20 metre area after half-an-hour, testament to their poor completion rate.

Closing in on half-time and every major statistic was heavily in favour of the Broncos, the Tigers were lucky to be only behind by 14.

Lawrence was struggling on the Tigers’ left edge before being taken from the field and rested for the rest of the clash with a possible hamstring strain.

In the shadows of half-time, Matt Utai finished off a classy lead-up by Robbie Farah, to burrow his way across the line to provide the home side with a massive boost just before half-time to trail by only 10.

Anasta said Tigers coach mick potter told the side they could still pull out the victory if they increase their completion rate.

“It was frustrating for us, we just have got to hold the ball more, we gave them too many penalties to piggy back them down the field,” Anasta said.

“Mick  was pretty calm and he said if the guys can hold onto the ball we can score, we scored a pretty  soft try towards the end, so the points are there.” 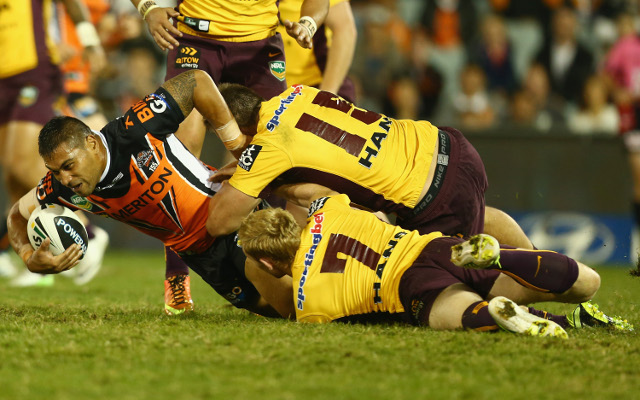 Wests showed an improved effort to retain possession early in the second half, but they did not look
likely to crack the Broncos’ line.

Sauaso Sue appealed for a try after cleaning up a Farah grubber kick, but a clear double-movement was picked up by the video referee.

Brisbane looked unconvincing in hanging onto their 10-point lead with the visitors not looking threatening for much of the game apart from their withering early burst.

The Tigers’ depth was further tested when Moltzen was taken off after injuring his anterior cruciate ligament for the second time in his career.

However, the game was turned on its head when Norman copped a horrible bounce from a bomb, allowing Shaun Spence to jump onto the loose ball to make it 14-10 with 17 minutes left.

Parker had the chance to make the lead a converted try, but he sprayed well to the left as Justin Hodges continued to wreak havoc on the right edge of the Broncos’ attack

Lachlan Maranta appealed for a try that would have sealed the game for Brisbane, however, the video referee ruled accidental offside against the Tigers in the scramble before the ball was grounded.

The Tigers players continued to drop like flies Ayshford was taken off with a suspected broken leg.

Hodges sealed the win for the Broncos after he sold a pass at dummy-half to barge his way over for the simplest of tries to make it 20-10.

In a sign of just how bad the injury-toll was for the Tigers they only had 12 players on the field
in the last minute.