Titans lose playmakers to injury to add salt to the wounds.

A second-half scoring frenzy by the Brisbane Broncos has seen them run out easy 32-12 winners against the Gold Coast Titans at Skilled Stadium.

With the game in the balance for the first hour of play, the outsiders and away side scored a late barrage of three tries to compound what was a miserable night for the Titans.

Five-eighth Albert Kelly, who has been showing excellent signs for the Titans through the first months of the season, was taken off hurt in the second half.

But it was the returning halfback Scott Prince who would prove be the worst enemy for his former club as he laid on several tries and provided a calming influence when needed.

Corey Parker again produced a stellar 80 minute performance for the Broncos, said after the game the side paid no attention to the outsider tag placed on them as they prepared to face the high-flying Titans.

“Whe’ve got no control outside of the club, we have been doing a lot of things right but we have been failing to close out games,” Parker said.

“We got them into an arm-wrestle with them early, we had a good kick chase and then we managed to have some fun towards the back end of the game with some good tries.” 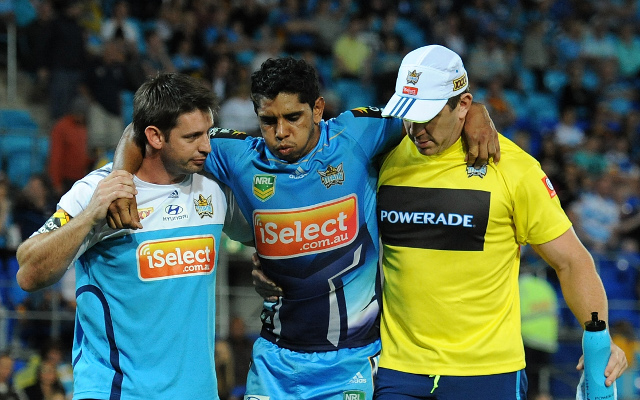 After trailing 12-10 to the Titans at half-time, Brisbane made a mockery of the calls just a fortnight ago that their options in attack lacked spark as they outscored the home side 22-0 in just 40 minutes.

Peter Wallace is beginning to form an excellent combination with Jack Reed on the Brisbane left-side attack, with seven tries being scored through that passage in the last two weeks.

Although it was not all pleasant reading for the Broncos, who could lose prop  Dunamis Lui to a medial ligament strain to his knee.

John Cartwright will also have some headaches with Aiden Sezer pulling out just before the game with a hamstring complaint, while Kelly (medial ligament) also could be out for several weeks.