Courageous player makes one last statement in what could be his last playing appearance.

If this was Brent Tate’s last time on a football field he was going to leave it under his own power.

Even if he has just suffered the fourth series knee injury of his career, with yet another likely ACL tear set to see him end his career stint for his current club the North Queensland Cowboys, with whom he was under contract for 2015.

“I won’t be rushing into surgery yet because I know what’s involved with that,’’ he said.

“I knew straight away it was my ACL, I felt the bang go and the pain came with it.

“I shed some tears of disappointment. The medicab was there but I wanted to walk off. I thought: ‘If this is my last game, I want to be able to walk off, that’s how I want to go’.

“That (his career) definitely ran through my mind when I was down. I was trying to stay calm because back in the Four Nations in 2010 but I lost control and didn’t help the team.

“I had some morphine to take the pain away.

“Because I’ve done my knee before, the recovery will take longer. I just think about what lies ahead of me. It’s the whole operation, sitting in the hospital bed again, I just feel crook, I don’t want to go through all this bulls*** again.

“I don’t know about playing on, that is what I’m wrestling with at the moment, that’s why I need a few weeks because things aren’t clear.

“I’m too emotional to be making any decision.’’

Tate has undergone the knife twice on his left knee.

He has had his right knee reconstructed once, providing a glimmer of hope the Cowboys stalwart can fight back one last time.

However, after 23 State of Origin games, 26 Test matches for Australia and 229 NRL games the road to recovery may just be too long this time for Tate. 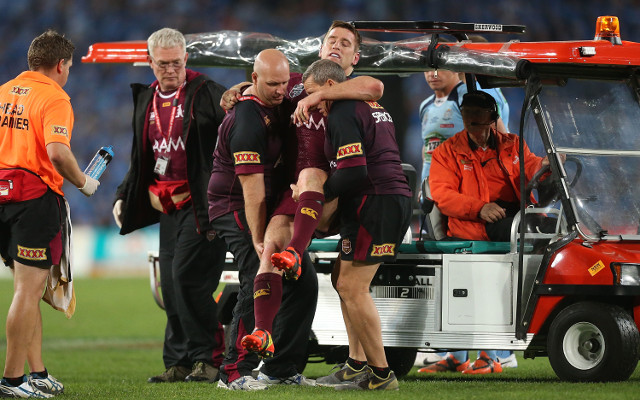