Cowboys centre’s career could be over after his fourth serious knee injury.

Queensland State of Origin winger Brent Tate will “take a big deep breath” and weigh up his playing future after admitting he needs a fourth knee reconstruction.

An emotional Tate fronted the media after returning to Townsville on Thursday, as everyone’s worst fears were realised when he acknowledged he had torn his ACL “again”.

Tate has already fought back from three previous knee reconstructions and a career-threatening neck injury but admitted it was still too early for him to make a call on whether he would call an end to his decorated playing career.

“It’s a whole heap of emotions at the moment so it’s probably just time to take a big deep breath for the next couple of days and see where we end up from here I guess,” Tate said.

“I’ve done my ACL again so it will be a knee reconstruction. I’m not really looking forward to that, but like I said I’ll probably just have a couple of days now to just digest it all a little bit and see what the outcomes are from the scans and see exactly how bad it all is.

“It’s still pretty raw at the moment. The disappointment is pretty big.”

Tate said he knew the extent of the injury immediately.

“I pretty much knew straight away,” he said.

“I felt the pop and it probably hurt more than the other ones, which was a bit strange, but I probably knew from the get-go that that was the case.” 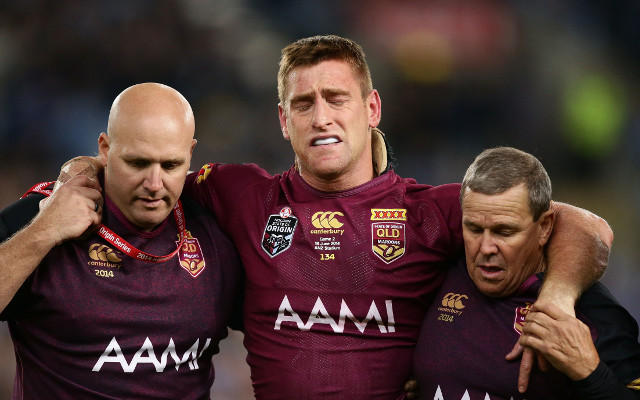