North Melbourne has burst into the winner’s circle in emphatic fashion after belting the Brisbane Lions by 63 points at Etihad Stadium.

The Kangaroos had a tough draw to start the season in facing Collingwood, Geelong and reigning premiers Sydney which resulted in three big losses.

However, Brad Scott’s men showed what they are capable of to lead at every change against the Lions to show they cannot be discounted as a possible top eight side this year.

The 18.17 (125) to 9.8 (62) loss was further soured for Brisbane when playmaker Pearce Hanley left the field in the third quarter with a knee injury while Jack Redden was placed on report for his bump on Leigh Adams.

The tone for the game was set early, as the Kangaroos netted the first 11 scoring shots to race out to a 4.7 lead. 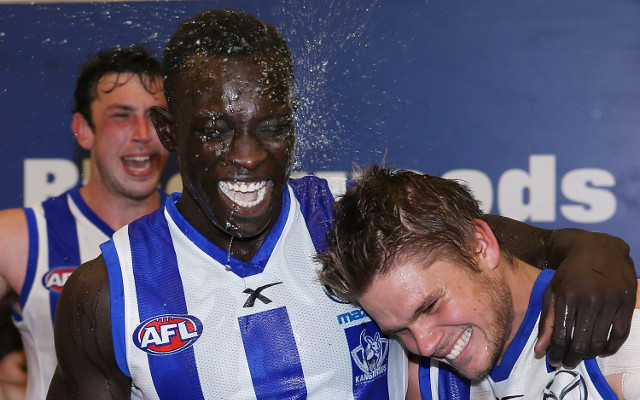 While the win itself was positive enough news for North Melbourne, the debut for Majak Daw also gives the side hope moving forward.

Daw became the first Sudanese-born player to crack the AFL and he had an eventful first quarter in getting getting three quality touches before being accidentally knocked out.

The ruckman was taken off as a precaution, with Scott saying his star recruit felt fine later in the game.

In the opening minute, the 22-year-old Daw goaled after taking a big pack mark.

Then came another contested grab and scoring assists with a spectacular tap-out and a deft knock-on, before being accidentally knocked out in a clash of heads with teammate Ben Cunnington.

The only negative from the win for the Kangaroos was their inaccuracy infront of goal which stopped them from sealing the win as early as the second quarter.

At one stage North Melbourne streamed forward to goal 17 times for just 28 points, which will not be good enough against better sides than the Lions.

North Melbourne face another tough challenge when they face the red-hot Hawthorn side in round five, while Brisbane will look to go back to the drawing board when they play Melbourne.

Check out the Kangroos singing their team song for the first time in 2013: