Star running back puts up insane numbers to help his side to the post-season.

Jamaal Charles for the Kansas City Chiefs was simply a cheat player on NFL 14, such were the crazy number the superstar running back put up in his side big 56-31 win over the Oakland Raiders.

Charles scored the first of his team record-tying five touchdowns on a 49-yard screen pass on the first play from scrimmage, sending the Chiefs to a 56-31 win over the Oakland Raiders on Sunday that clinched at least a wild-card spot.

The Chiefs built a 35-10 lead before the Raiders scored three straight touchdowns to make it a game late in the third quarter. It quickly became a blowout again.

On a third-and-1, Smith found Charles on a wheel route down the sideline for a completion. Charles then cut toward the middle and raced in for the 71-yard score that tied Abner Haynes’ team record set in 1961 against the Raiders with five TDs in a game.

The Chiefs put the game away after Taiwan Jones fumbled the ensuing kickoff, setting up a 6-yard TD pass to Sean McGrath that made it 49-21.

Knile Davis’ 17-yard run midway through the fourth quarter gave the Chiefs the highest-scoring game in the NFL this season and the most points ever scored against the Raiders, breaking the mark of 55 last reached by Baltimore in 2012.

The Raiders were officially eliminated from the playoff chase for the 11th straight season shortly before kickoff and played like a team going nowhere. 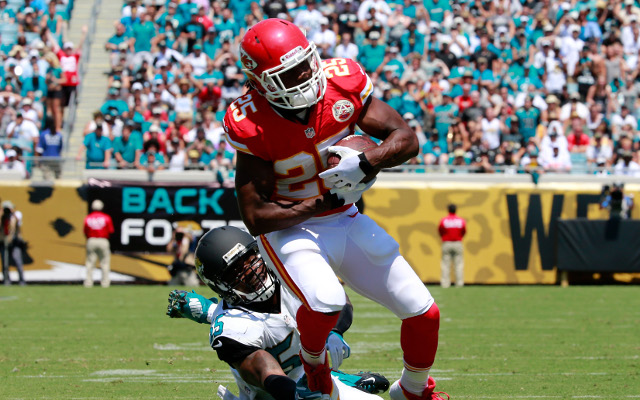