Vital offensive cog will be in the line-up to play the Cowboys.

With four small words all Kansas City Chiefs fans breathed a little easier ahead of week two of the NFL season.

When pressed how close he was to 100 per cent healthy, Charles only added “I’m ready-to-play per cent”.

Charles was taken off in the third quarter after sustaining a quad muscle injury  at Jacksonville before returning briefly before being subbed out of the game completely.

The Chiefs coaching staff elected to rest Charles for the rest of the game with the side already up 21-2 against the Jaguars, before adding another seven to their total to run out easy winners.

“There was no reason (to continue), so that’s why I didn’t go back into the game,” he said. “I wanted to but the coaches told me to relax and go to the sideline and go in and get treatment. My best opportunity was to go inside and get treatment on my leg and get ready for the next week. Every game is very important to win.”

Charles has slowly been brought back into the training rotation this week, having sat out Wednesday as a precaution, before completing light work on Thursday and a full hit-out on Friday.

“You’ve just got to fight through it. I’ve been through tougher things than this. I’ve fought through a whole bunch of stuff that’s been hurting me. I’m really a tough player and I’ll play through pain.

The Chiefs fans will be hoping he can fight through any pain he might be feeling against the Cowboys after Charles ran for 77 yards on 16 carries, at an average of 4.8, with one touchdown last Sunday. 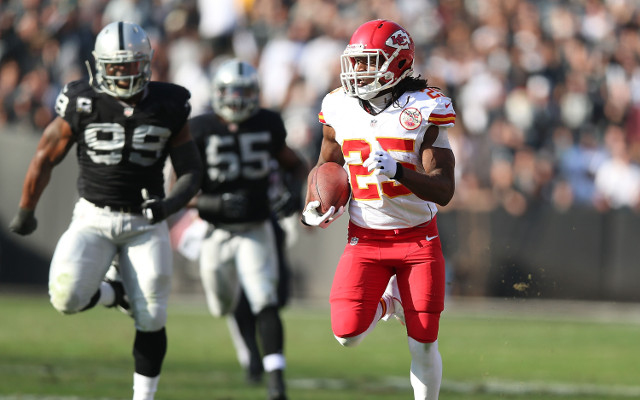