Giants blown away in the final minutes as home side scores 12 goals in the last quarter.

Never had a game between the two teams at the bottom of the AFL ladder been so important just four rounds into the season.

Amazingly, the Demons trailed by 19 at three-quarter time as their horror season looked to take another turn for the worse.

But 12 goals in the last term propelled them to the 41-point win, with the stunning burst becoming the highest scoring quarter in the club’s history. 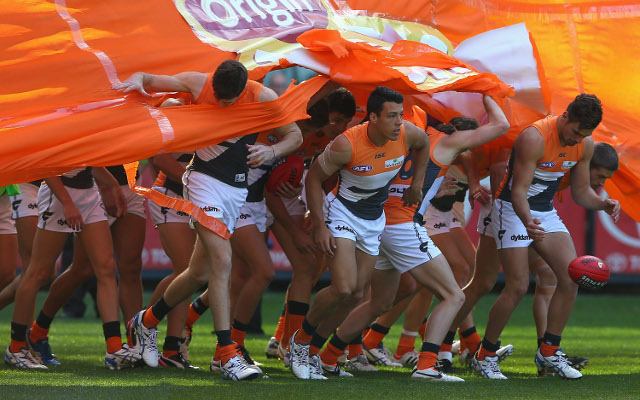 A goal to Jones sparked the team into action and when all looked gone, Max Gawn took a mark in the goalsquare and the Demons regained some belief.

A piece of Colin Sylvia inspiration led to a goal by Michael Evans, which tied the score at the seven-minute mark. And this was without key forward Mitch Clark and prized recruit Jack Viney who were both off the ground. Clark had a foot injury that Neeld described after the game as a “sprain”, while Viney, who had struggled with an ankle injury for the past two weeks, had been subbed off.

The Giants, as they had all day, answered quickly through Toby Greene, but the Demons kept coming and young co-captain Jack Trengove put Melbourne back in front at the 12-minute mark.

Jeremy Howe followed up with one from the boundary line to give his team some breathing space as it had kicked five goals in the first 14 minutes of the quarter. Then two goals from Aaron Davey – who had been the substitute – put the result beyond doubt.

The fright for Demons was real and long lasting early once the Giants kicked five unanswered goals during the latter part of the second quarter to take a seven-point lead into half-time.

With the Demons appalling record in third quarters, no-one at the ground had much confidence Melbourne could turn things around. Again they were outscored in the third quarter five goals to three and trailed by 19 points at three-quarter time.

The Giants’ young runners Adam Treloar, Dylan Shiel and Stephen Coniglio were too quick in the first half while Tom Scully and Callan Ward outworked their opponents.

Whatever Mark Neeld said to his Demons at three-quarter time sparked something special. He went to the huddle under enormous pressure with his coaching obituaries being written and the critics forming a conga line around the members’ wing.

The Giants were gallant given they had lost Jonathan Patton and Dean Brogan but they ran out of legs in the end.

Checkout the highlights from the game below