If Melbourne Demons fans thought there was only one way for their side to travel after their capitulation in the first round of the AFL season, they were wrong.

The Demons were humiliated for the second time in as many weeks as Essendon racked up a record score to inflict further pain on a club that is staring down the barrel of a worthless season.

Pundits lashed the  Demons for the lack if spirit more than skill as they succumb meekly towards the end of the game. 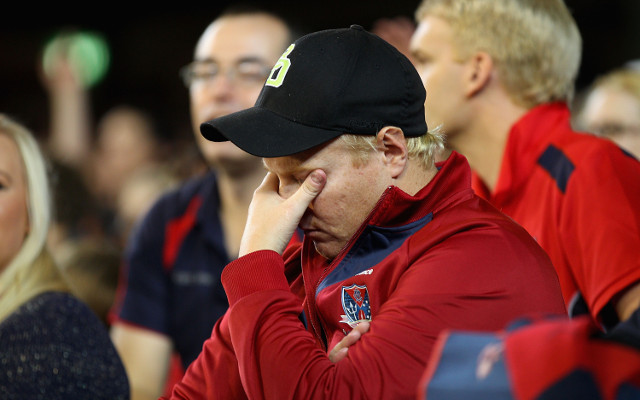 A glum Mark Neeld fronted the media pack after the game and said the performance by his side was simply “not good enough”.

“It wasn’t good enough and there’s only one way out of this and it’s together,” the Demons coach said.

“The whole club is hurting, from here it’s head down, work hard.

When asked what specifically what Neeld didn’t like from his side he asked back.

“How long have you got?”

For the first 15 minutes the Demons looked to have found the spark needed to get them around the ground and compete at the highest level.

But soon that faded away and so did their chances at victory as the Bombers did as they pleased sparking some staggering statistics.

Essendon claimed nearly twice as many marks as their opponents at 144-74 while they also claimed a mind-boggling 78 inside forward 50s.

“We were combative early, but it didn’t last long enough,” Neeld lamented.

“We have to allow sometime for huge disappointment from the players, we can’r pretend the last two hours didn’t happen, we all just have to man up.

“Second crack at a rebuld in five years and we’re not off the basement just yet.”

The draw does not get any easier for the Demons who face premiership contenders West Coast at the MCG in round three.

Watch the post-match reactions from Melbourne captain Jack Grimes and the highlights from the game below: