Hawks stun the Magpies to run out convincing winners at the MCG.

Hawthorn showed they will still be a premiership force this AFL season after producing a scintillating display to stun the Collingwood Magpies by 55 points.

The clincial nature which the Hawks picked apart their opponents in the second half was breathtaking to watch, as was their ball movement and skill on the run.

Both attributes were never more evident when the Hawks produced a top contender for the team goal of the year award.

With 18 minutes gone in the third quarter, the Hawks managed to move the ball the length of the field in just 12 seconds.

Following a long kick-in down the middle to Ben Stratton the centre half-back set off before finding Lance Franklin on the angle with a hand-pass, before ‘Buddy’ hurdled his fallen teammate without breaking stride to goal from more than 70 metres out.

The stunning passage of play was just one of the highlights on a big day for the Hawks. 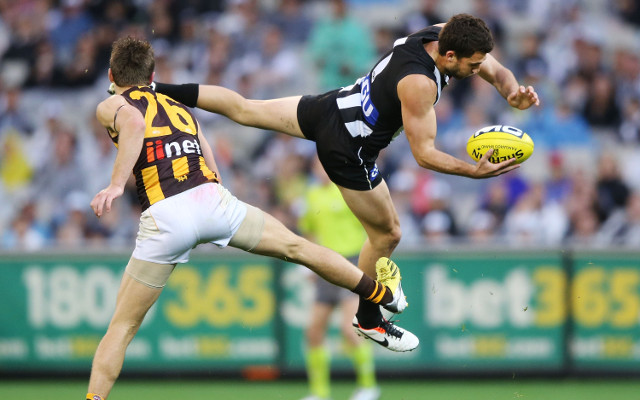 Hawthorn skipper Luke Hodge wound back the clock to lead from the front for his side with the midfield general kicking two stunning snaps from 50 metres while also collecting 31 possessions.

Hawks coach Alastair Clarkson was not getting carried away with the size of the win or how his side managed to blow away one of the most skilled sides in the competition, especially after their slow start to the game.

“Collingwood is an outstanding side at being able to play in those type of conditions. They’re well-suited, to play that type of footy and we just didn’t adapt very well at all,” Clarkson said.

“When Collingwood were quick handball, quick kick and get it moving forward, we tried two handballs or tried to finesse with the ball a little bit, so it took us a fair while to come to terms with that, and that meant that the Pies were able to apply a fair amount of scoreboard pressure on us in that period of the game.

“But once we were able to correct that we used our chances to get the ball forward (and) when we had those chances the game started to turn our way.” 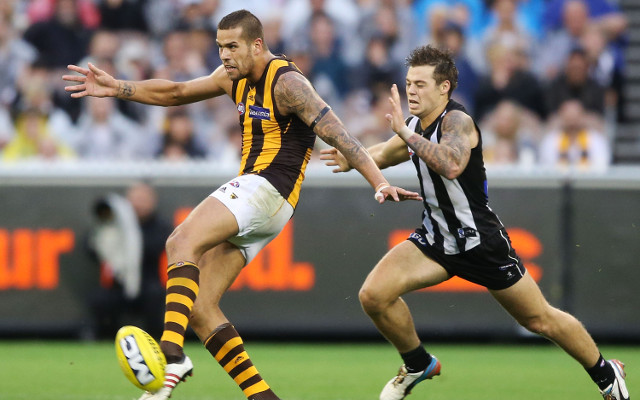 “As the game wore on they were tougher, more physical, able to get handballs out of our tackles and stop us from doing the same, and in a nutshell that is where the game is won and lost,” Buckley said.

“I am not suggesting at any stage that our players gave up. Hawthorn are a very strong footy side and they won in the areas that you need to win to win footy games.”

Collingwood dominated the contested ball through the first quarter with small forward Jamie Elliott picking up where he left off last round against Carlton, to kick two goals early as the Pies led by nine at quarter time.

Travis Cloake also was impressive early for the Magpies as he racked up several early goals, but Scott Pendlebury sent a scare through the Collingwood camp when he needed extensive treatment on a hip flexor injury.
Despite Collingwood dominating much of the first half, the Hawks kicked the last three goals through Jed Anderson, Franklin and Hodge to make the margin just one at the long break.

From there the Hawks’ midfield busted the game open despite Cloke kicking five goals, including two in a row midway through the third quarter that helped Collingwood get back to six points.

Dane Swan (a game-high 33 possessions) and Pendlebury (29) were typically prolific for the Pies in the midfield, but after the first term lacked their usual spark.

Check out the many highlights from the game below: 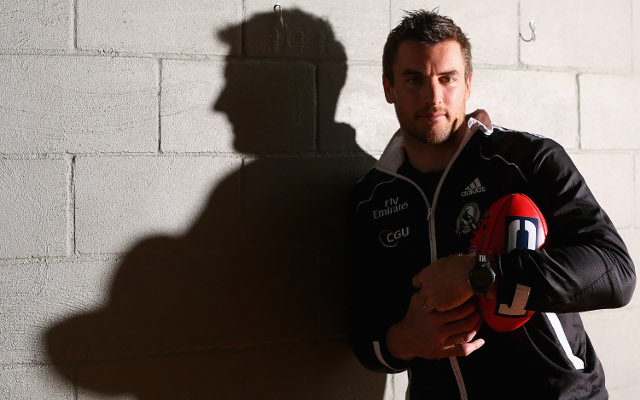