Forward line steamrolls a shell-shocked Eagles outfit in the west.

Hawthorn Hawks coach Alastair Clarkson said his side answered its critics in emphatic fashion after running out impressive 50-point winners against the West Coast Eagles.

Despite the size of the final margin, the Eagles were well in the contest despite trailing by 19 going into the final term.

Clarkson paid tribute to his side for pushing through the pain barrier in the closing stages, with the warm conditions taking its toll on most players.

“The boys really dug in and had a super last quarter,” Clarkson said.

“We’ve worked hard over the summer and we’re always confident in our ability to push out quarters.

“Both sides were cramping a lot and we just looked a little bit more fatigued. But we handled that West Coast onslaught in the third quarter and just regrouped at three-quarter time.”

Hawks captain Captain Luke Hodge impressed in his first game of the season.

“I’m feeling all right now. Tomorrow, I guess, that will tell me,” he said.

“I was tired at times throughout the game but felt like I ran out the game OK. I look forward to a lighter week on the track and then Collingwood next week.” 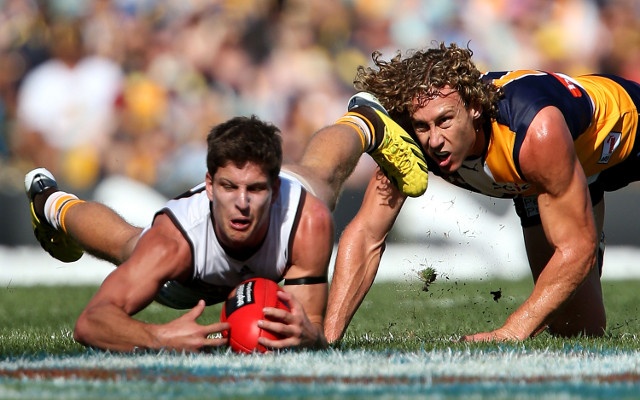 The Hawks forward line clicked for most of the game, with star Lance Franklin kicking five goals but he was ably assisted by Cyril Rioli (four), Luke Breust (four) David Hale (two) and Jarryd Roughhead (two).

Chris Masten (33 disposals), Luke Shuey, (26) and Matt Priddis (26) did their best to try and peg back the margin late in the game, but it was all the Hawks who rebounded well from their heart-breaking loss to Geelong in the first round.

The win to Hawthron sets up a game that will have a grand final-like build-up when they face Collingwood at the MCHG, while West Coast will look to get back on track when they play the struggling Melbourne Demons.

Check out the highlights of the game below.