The aptly-named Blues suffer a horror start to their AFL season.

The 2013 Cartlon Blues have created a piece of unwanted history for coach Mick Malthouse, after going down to the Geelong Cats by 16 points at Eithad Stadium.

Their win-less start through the first three rounds is the first time a Malthouse coached team has achieved that feat since his 1987 Footscray side.

Carlton kept pace with Geelong for much of the first half before the Cats blew the game open in the third quarter in kicking five goals to two and they were never headed, going on to win 18.11 (119) to 15.13 (103). 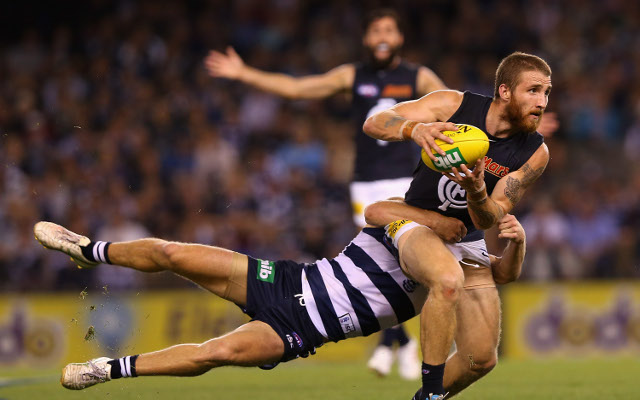 Carlton’s depth of big men will be tested after Matthew Kruezer came from the ground in the first quarter and was sent to hospital for a suspected broken thumb, which could rule him out for eight weeks.

The Cats were not without their injury worries after the game either with the side forced to use its substitute early Travis Varcoe picked up a serious shoulder injury and was forced from the field. 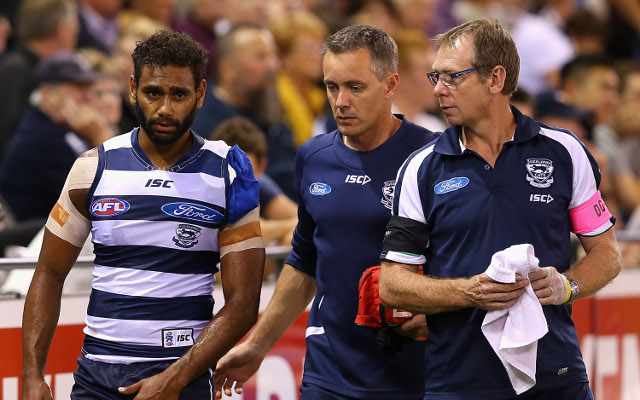 Stevie Johnson sent shudders through the Geelong camp when he injured his right knee, but ha battled on and finished the game.

After trailing by as much as 16 points in the first term, the Cats finished the stronger to take a narrow lead at the break.

A double by Jeff Garlett in quick time again gave the Blues a handy buffer in the second quarter and the lead grew to beyond two goals.

But like in the first term, Geelong came storming back and thanks to goals from , Mathew Stokes, Taylor Hunt and Tom Hawkins, Chris Scott’s men led by 19 at the main break.

In a crucial tagging job, Taylor Hunt shut down Marc Murphy in the first half, keeping him to 12 possessions. Hunt collected 10 touches, five tackles and three goals in the first half for himself.

Despite the lead being 33 to the Cats at three-quarter time, the Blues willed themselves towards their first win of the season and closed the gap to just 10.

The Cats looked set to steady when Jimmy Bartel found Johnson on a lead, but the ball was brought back after a streaker invaded the ground.

However, a long-range goal from Stevn Motlop was enough to get the Cats their third win for the season.

Joel Selwood could come under scrutiny from the Match Review Panel for slapping Zach Tuohy just before half-time, which resulted in a push and shove at the main break.

Check out Geelong’s Tom Hawkins making the most of an asleep Carlton defence: