Eddie Betts and Jeff Garlett again showed why they could be considered the best small forward duo in the AFL as the pair starred in their side’s 61-point victory against Melbourne.

Both Betts and Garlett kicked four goals each as Carlton dominated from start to finish to heap more misery on the Demons, in what has already been a year to forget.

Helping take some of the attention of Betts and Garlett was centre half-forward Jarrad Waite provided a focus for the Blues attack as the side ran out easy 18.13 (121) to 8.12 (60).

Making matters for the Demons is the long-term injury to co-captain Jack Grimes, who looks set to miss between eight to 10 weeks after breaking his collarbone. 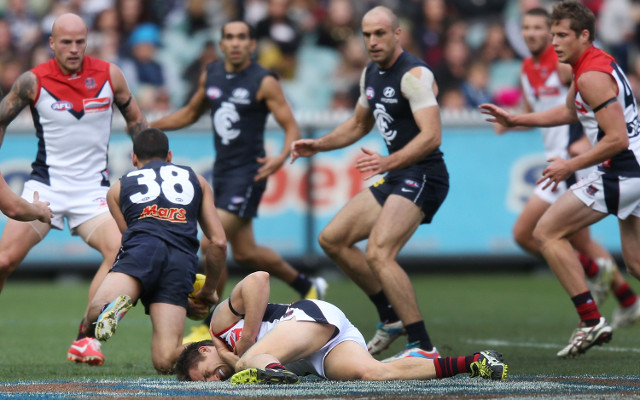 Grimes was driven to to the turf in a heavy tackle and got up hold his left shoulder and was immediately subbed out of the game, when the seriousness of the injury became obvious.

By quarter time Carlton has opened up an unassailable lead of 28 as Mick Malthouse’s men poured on more pain on the scorebaord with every passing minute.

Melbourne again fought hard for the football at ground level and in the air, but the difference in class between the Demons and a fringe top-eight side like Carlton is plain to see.

Marc Murphy again starred for the victors in collecting 28 possessions and kicking three goals while Kane Lucas and Heath Scotland (28 disposals each) also were impressive.

Carlton have crept into eighth place at the end of round six as they prepare to face the slumping St Kilda next weekend.

But the injury to Grimes will test their already stretched midfield player stocks as they prepare to try and shut down Gary Ablett and the Suns at the MCG on May 12.