Queensland rivalry taken to a new level thanks to thrilling final quarter.

The Brisbane Lions have hung on to win a thrilling QClash by two points over Gold Coast at Metricon Stadium.

Pearce Hanley appeared to put the game beyond doubt with a goal two minutes from time, but former Lion Michael Rischitelli breathed life into the game just seconds later with a freakish goal of his own.

Following Rischitelli’s mid-air volley the ball was camped in the Suns’ front half for the final moments before the Lions cleared and won their fourth QClash in succession.

They can largely thank co-captain and Marcus Ashcroft Medallist Jonathan Brown, who kicked five goals in a vintage wet-weather display.

Brown had kicked just one goal in the first two matches of the season and admitted during the week he needed to lift. He did so in fine style. 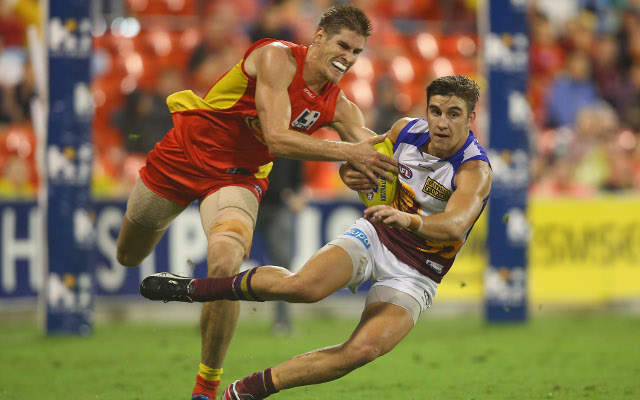 Manned by impressive young defender Rory Thompson, Brown kicked two goals in the first quarter, one in the second and two in the third in the slippery conditions.

The Suns, though, refused to give up and ran down a 24-point third quarter deficit to level the contest, before again squaring scores in the fourth term after trailing by 15 points.

The momentum see-sawed in a dramatic final term that had the 12,961 fans on the edge of their seats.

Former Lion Jared Brennan was a star for the Suns, racking up 30 disposals and having 11 clearances.

It was arguably his best game for the Suns since the teams’ first QClash in 2011.

Harley Bennell came to life in the second half and finished with 27 touches and three goals.

Another Lion under the pump during the week was Daniel Rich after two sub-par performances to start his season, but he bounced back with 27 disposals.

The Andrew Raines-Gary Ablett duel was virtually a draw, with Ablett’s 27 touches failing to hurt the Lions while Raines had 21 of his own.

Hear what Steven May and Greg Broughton from the Suns had to say about the latest QClash:

And from the victors, debutant Sam Mayes reflects on the Lions’ narrow win: