The BYU Cougars were stunned by the Utah State Aggies, 35-20, and they received their first loss of the season as quarterback Taysom Hill fractured his left leg.

Utah State improved to 3-2 with an upset win over BYU on the road, and the Cougars’ hopes for making a bid for a major bowl were dashed.

To add insult to injury, BYU quarterback Taysom Hill was taken out of the game late in the second quarter with a fractured left leg. The quarterback will be out for the season, effectively ending his hopes to win a Heisman Trophy.

Aggies quarterback Darell Garretson had an impressive performance as he threw for 321 yards and three touchdowns on 19-of-25 passing. Running back Nick Vigil led the team in rushing with 57 yards and a touchdown on 16 carries.

Hunter Sharp led the Aggies receivers with five catches for 173 yards and a touchdown while Devonte Robinson added six receptions for 98 yards and two touchdowns.

Jordan Leslie led the Cougars in receiving yards with 135 on four receptions, and Mitch Mathews added eight receptions for 117 yards and a touchdown. 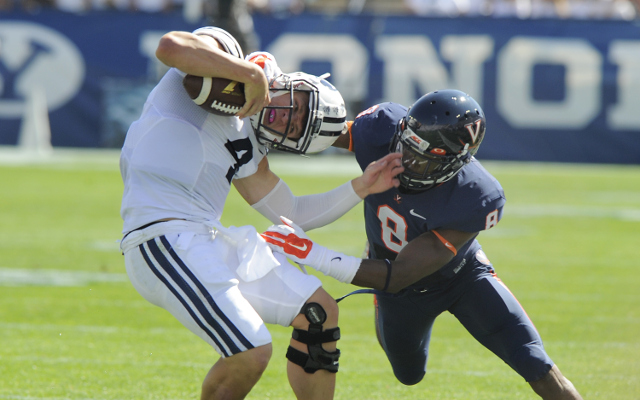