Europe is home to the world’s best footballers, but who has been playing the best this season? There are a number of candidates, obviously Cristiano Ronaldo and Lionel Messi, but Alexis Sanchez and Arjen Robben have also been having good seasons so far.

Here are the top ten players in Europe so far this campaign, according to statistics from Whoscored.com. 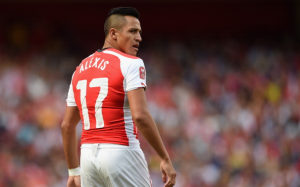 The Chilean has managed to keep Arsenal near the top of the Premier League, despite the rest of the team playing poorly.