Premiers do what they have do to to earn win but Giants show marked improvement from 2012.

Sydney started its AFL premiership defence with a 30-point win over Greater Western Sydney at ANZ Stadium, but the Giants showed on Saturday just how far the gap between the city’s two teams has narrowed.

The Swans were scrappy at times as they blew out the cobwebs, but Josh Kennedy and new co-captain Kieren Jack dominated in the middle to pilot their side to a 16.10.106 to 11.10.76 victory.

In a hard-fought contest underlined by the plethora of stoppages and smothers, GWS showed how far they’ve improved after one year in the league – especially in a second-quarter burst that featured two goals from Jonathon Patton. 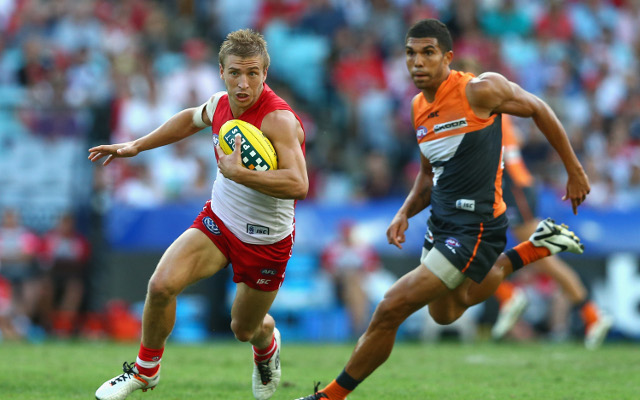 The Giants were behind by 25 points at quarter-time, but kicked the next five goals to boast a five-point lead midway through the second term.

There were almost four minutes of uncharted ground for the Swans after Devon Smith snapped a spectacular goal from the boundary line.

Discounting a 24-point loss this pre-season, the reigning premiers had never trailed GWS at any stage of a match.

The response came from Sydney’s leaders. Jude Bolton and Jarrad McVeigh slotted goals, while Jack kicked two to restore the Swans’ advantage to 27 points at halftime.

Jack was best afield for the underdone Swans, and won the Brett Kirk medal.

The Swans did what they needed to, but coach John Longmire is unlikely to be happy with the fact six of the Giants’ first seven goals came from turnovers.

Shane Mumford was a force up forward, snaffling five contested marks in the opening term while Stephen Gilham, Tim Mohr and Phil Davis tried to curb his influence at different times.

But the 26-year-old managed only 1.2 from his set shots, reflecting the Swans’ inability to kick clear early – despite the fact they held the Giants goalless in the opening term.