St Kilda Saints prove no match for the hottest side in the competition.

The Richmond Tigers showed they will be a forced to be reckoned with in the AFL finals this season, after thumping St Kilda by 64 points at the MCG.

The loss for the Saints, their 10th for the year, sees the once glamor side of the competition plunge to be in 15th with finals now just a pipe-dream for 2013.

An early goal to the Saints gave them hope as they started very big in their forward line in the hope of getting  off to a fast start.

St Kilda moved the ball well in the first quarter as they were able to find men free for uncontested mark.

Jack Riewoldt scored the first goal for the Tigers after he turned the pack around, in what was a
steadying goal for the side.

While it might not have been one of his best in his career, the goal was Riewoldt’s 300th in the AFL, as he became just one of 10 others in Tiger’s history to bring up the triple century.

Riewoldt then made the most of his third shot on goal for the game as he put his side in front for the first time. 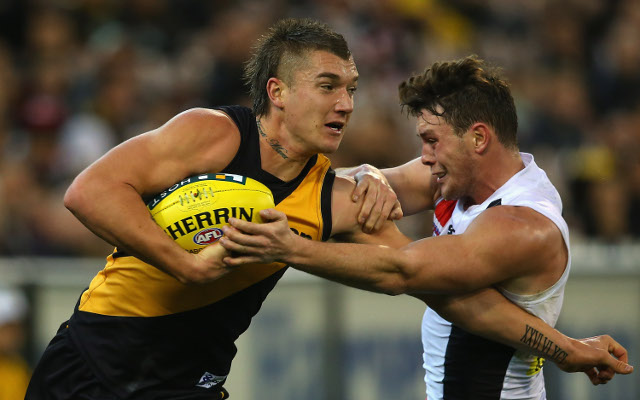 Jack Steven goaled off the back of a fluid movement for the Saints up the field to grab the lead by five again.

Richmond draw level but their entries into the forward 50 have not been conducive to clear set-shots on goal with marks often being taken at acute angles.

The Tigers has secured seven intercept marks in the first quarter in a sign the Saints continued to struggle with the basics of finding an open man.

Richmond led by eight points at the first break, but the Tigers were playing well enough to deserve more of a gap on their opponents

Sean Dempster was under pressure for the Saints as Riewoldt got quick ball to the top of the square for his third for the game, with the Tigers securing the biggest lead of the game at 14 points.

Richmond started to put a big gap on their opponents late in the second quarter as they gained several mismatches inside forward fifty.

Vickery made up for his play off the ball with yet another goal as the lead grew to 29 as the inside 50s and clearances blew out in favor of the black and gold side.

Justin Koschitzke had a first half to forget just when their side needed him to lift as he secured just two kicks for the first half.

Shaun Grigg gave the Tigers a 35-point lead with two minutes still left before half-time as the game quickly was ripped away from St Kilda.

St Kilda too often were guilty of simply standing and watch in defence, with numbers around the ball being all but useless at the Tigers led by 41 at the long break.

The Saints scored an early goal in the third term to give them some momentum, but testament to their fortunes of late, their execution was off.

Despite the best efforts by St Kilda, they were unable to make any inroads into the margin as the likely loss to seem out of the running for the finals for this season. 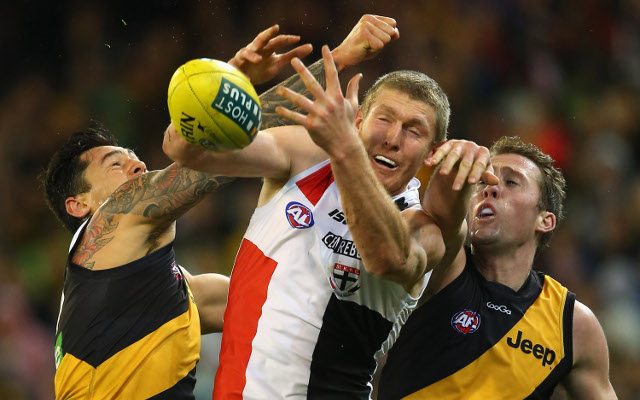 Rain began to fall mid-way through the third term to further put a dint in the Saints’ hopes of a comeback win, which was all but gone.

St Kilda continued to be sloppy in defence as they continued to give the Tigers too many chances
to score, many of which they took and ran with.

At three quarter time the Richmond Tigers led by 56 points before going on to win by 64.

Riewoldt and Daniel Jackson both kicked three goals for the Tigers with Brett Deledio also bagging two majors to go with 24 disposals.

The Saints will head west to play the Fremantle Dockers next round in the hope of salvaging some pride this season while the Tigers will look to keep their hot-streak going when they take on North Melbourne at Etihad Stadium.