The first of our trio of Hammers to make the team, Adrian shut out the Gunners to help Slaven Bilic to a memorable victory on his maiden appearance as a Premier League manager.

The Italian was one of the most impressive debutants on opening-day weekend, putting in an assured display which suggests that Antonio Valencia may be stuck on the bench for much of this season.

Reid showed why he was once an Arsenal target with a commanding performance at the Emirates. He dominated his tussle with Olivier Giroud and made three crucial blocks.

Back in the centre of defence and given the responsibility of the captain’s armband, this was like the Richards of old as Villa battled their way to a narrow victory over newly-promoted Bournemouth.

Solid in defence and the scorer of a crucial goal in the 3-1 win over Norwich City, we shift the Palace veteran to the left side of the back four in order to accommodate him in our side.

Opened the scoring for United, with an assist from Petr Cech. Showed remarkable energy and fitness for an opening-day game and also helped usher 16-year-old Reece Oxford through the match.

The Ivorian was accused of being past his best last season, but boy did he prove those doubters wrong with a two-goal display in City’s comprehensive 3-0 victory away at West Bromwich Albion.

The Brazilian playmaker was quiet for much of the contest before coming up with a genuine moment of magic to clinch Liverpool the three points against Stoke City. He was the difference between the sides. 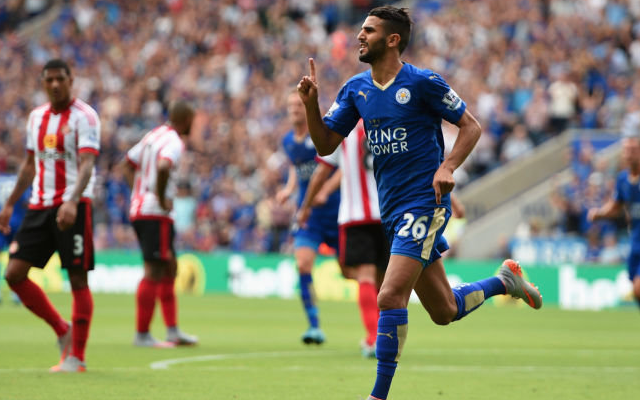 Mahrez ripped Sunderland to pieces in the first half of Leicester’s 4-2 victory at the King Power Stadium, scoring the opener and then another from the penalty spot. He also hit the post after the break.

The Ecuadorian did what not many before him have done; get the better of Branislav Ivanovic. He was a nuisance to the Chelsea right-back all game and just gets the nod over West Ham’s Dimitri Payet.

Gomis won and then successfully converted the penalty which got Thibaut Courtois sent off, and it was his powerful header which the Belgian parried in the build-up to Andre Ayew’s equaliser in the 2-2 draw.

Private: What are Leicester City’s chances in the Champions League?