Gold Coast cannot stop the Power from winning their fourth game of the year.

Port Adelaide have secured their best start to an AFL season ever after thumping the Gold Coast Suns by 38 points at Metricon Stadium.

It was a successful return to the Gold Coast for Port coach  Ken Hinkley, who was Guy McKenna’s assistant for the past three years.

Port Adelaide now sits alongside Essendon on top of the competition and hosts West Coast at AAMI Stadium next Saturday.

The Power worked relentlessly both with and without the ball, suffocating the Suns (1-3) in close, and spreading hard when they won the ball. 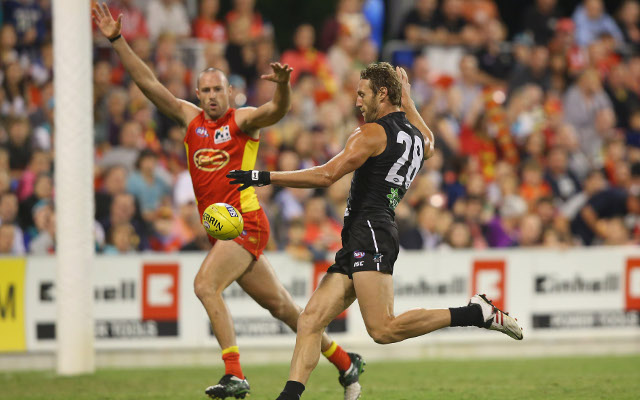 Hamish Hartlett was outstanding, racking up 29 quality disposals and kicking all three of his goals in the match-turning second quarter.
Kane Cornes was also influential, turning his night around after a horrid first quarter.

He started alongside Gary Ablett and watched the Suns skipper notch 15 disposals for the term, but was then set free by Hinkley.

He finished with 35 touches, with an astonishing 33 of them uncontested.

As Cornes ran free, Dom Cassisi switched over to Ablett and kept him to 19 touches for the final three terms.

It was a complete team effort built on power running and desperation without the ball.

Jay Schulz (four goals) and Justin Westhoff (three) were a handful for the Suns’ defence.

Schulz took a spectacular mark in the third quarter, jumping on to the shoulders of Sam Day to pull down a screamer. 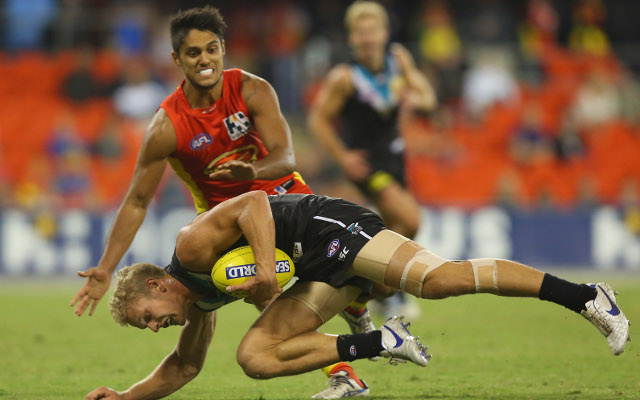 The Power’s pressure flustered a Gold Coast team that had been super competitive in the opening three rounds but got a big reality check on its home turf.

Whether it was Hinkley’s intimate knowledge of the Suns or just his team’s superior work-rate, it was largely one-way traffic.

They literally ran rings around Gold Coast in the second quarter.

Jake Neade’s sublime snap typified the dominance as he tracked down a loose ball, sold Greg Broughton some candy, then calmly walked into an open goal as the Suns defender flew past him.

It was a poor night for the Suns, who entered the match without Harley Bennell (hamstring) and lost Joel Wilkinson (ankle) and Matthew Warnock (shoulder) with injury.