Luke Walsh and Matt Moylan star for the victors in 32-point thrashing.

The Penrith Panthers snapped their five game losing streak to thrash the Parramatta Eels in an eight tries to one romp at Centrebet Stadium.

After a slow start to the clash, Penrith ramped up the pressure on the Eels’ line after the 20 minute mark to ensure they were never in the game.

Penrith playmaker Luke Walsh was outstanding for his side, directing the play well and again showing off his superb kicking game.

The Panthers looked to have unearthed a star of the future, with fullback Matt Moylan winning man-of-the-match honours for his performance in the 44-12 thumping. 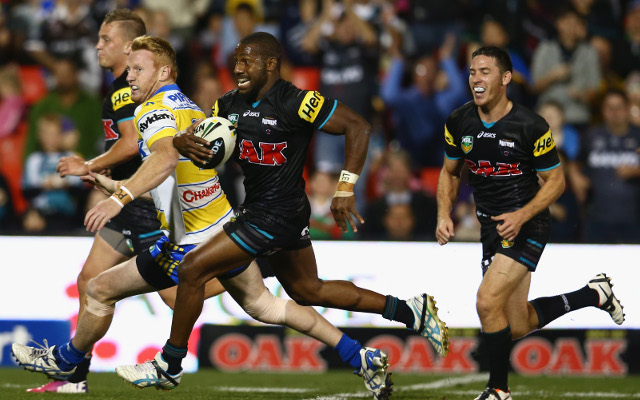 Parramatta’s bad night started even before kick-off after they lost centre Ryan Morgan to a hamstring strain in the warm-up.

Travis Robinson scored an amazing try for the home side in the third minute after taking a quick tap from a catch in-goal, racing  80 metres untouched to score.

Incredibly, Robinson scored off the first touch of the NRL season, having been brought in to cover the slew of injuries suffered by the Panthers.

Parramatta started to get into the game off the back of a solid kick-chase and good metres up the middle of the field when they had the ball in hand.

Jarryd Hayne scored off the back off a Chris Sandow grubber to Vai Toutai on the short-side to see them draw level at six.

Both sides struggled to control the ball through the first 20 minutes, with the side able to turn the screws by completing their sets, likely to lead at half-time.

Walsh put his side on the front foot by slotting a 40-20 with David Simmons crossing after a play
on the Panthers’ left edge create space for the try.

Walsh could not replicate his form with the boot earlier with the conversion waved away to make the score 10-6.

The Eels started to give away penalties as the home side were coming out of their own half, and off the back of those easy metres, the Panthers sliced the Eels open up the middle with James Segeyaro doing well to skip out of a tackle to score near the posts.

Toutai showed tremendous strength to power across the line for the Eels despite having four Panthers hanging off him to make it deficit just four.

But that would be as close as the Eels would get.

Robinson scored his double off the back of a smart option by Walsh, who created the extra man in the line to beat the Eels on their right-hand side defence.

A Sandow 40-20 with just 15 seconds left in the first half but the Panthers hung on to lead by eight at half-time.

Segeyaro scored his second after the break and pointed to the sky for the second time in tribute of Alex Elisala, a former teammate at the North Queensland Cowboys who died earlier that night aged just 20.

The try was set up by Simmons, after he bust through some poor defence by the Eels and the conversion gave the Panthers a 14-point lead.

Tim Mannah carried off the field with apparent ankle injury,despite scans being called for, coach Ricky Stuart said after the game the initial diagnosis leaned towards a break. 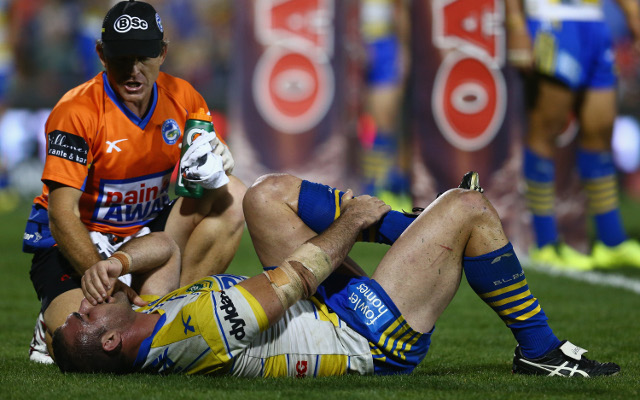 There were mistakes aplenty by both sides at around the hour mark, but the Panthers made the most of the extra possession to see Dean Whare cross to make it 32-12.

Parramatta then turned into a rabble as they chances their arm to try and score quickly to
give their side an outside chance of winning.

Another excellent kick from Walsh saw it take a perfect bounce to find Lewis Brown, before a final try to  Simmons put the cherry on top of an impressive victory for the Panthers.