Under siege leader keeps his post after long meeting with club board.

Melbourne Demons coach Mark Neeld has survived being cut for now, after meeting with the club’s board for two hours on Monday afternoon.

Neeld has been under heavy pressure this year as the Demons continue to struggle in the AFL, with the side being thumped by Hawthorn to the tune of 95 points last round.

Despite the mounting pressure on the club to take action to avoid the side sliding further, they have retained Neeld, with further assessment to be done later in the year.

Neeld, along with assistants Neil Craig and Todd Viney and football manager Josh Mahoney, said they needed more time as they attempted to overhaul the program from top to bottom.

Neeld also pointed to the some positive signs the club was making improvements, despite the Hawks loss being the fourth time in 2013 they have lost by more than 15 goals and their seventh defeat by more than 60 points.

President Don McLardy said there will be no further speculation or comment on Neeld’s position at the club in the short-term.

“Today, as with all board meetings, there was a presentation from the football department from Mark Neeld, Neil Craig, Todd Viney and Josh Mahoney,” McLardy said.

“Our on-field performances have not met expectations this year and everyone in the football department continues to face ongoing assessment in their roles as do those employed in other areas of the club. The club will make no further comment at this time, in relation to the senior coach position.”

The Demons again have a tough task ahead of them as they look to take down a Collingwood Magpies side fresh off a 49-point mauling of the Brisbane Lions. 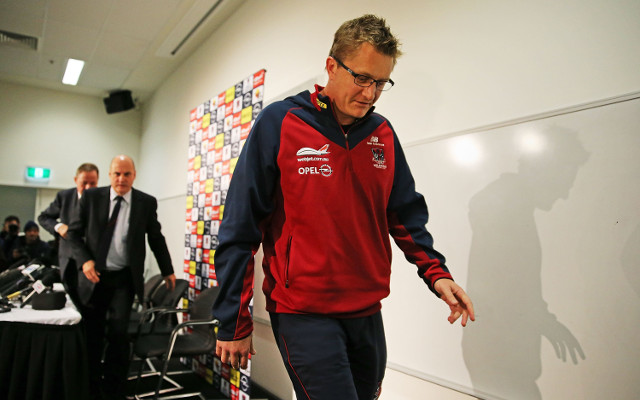